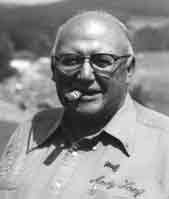 Andrew C. Long of Shamokin, Pa. was on the Executive Committee of the ATA when the Hall of Fame was being established and dedicated, succeeding to the presidency of the ATA in 1972, three years after the Hall of Fame became a reality. A familiar figure to many at the Grand American for a number of years, Long manned the payoff window for numerous years and also worked inside the Grand office operation. For 28 consecutive years, Long served as secretary of the Pennsylvania State Sportsman's Association, and he was a driving force of the association as the Valley Gun and Country Club became the Pennsylvania homegrounds and through various expansions that resulted in the largest facility in the ATA, other than that at Vandalia, at that time

Long captured his initial Grand American award in 1959, finishing fourth in AA of the Class Singles Championship following a tie at 200. Another 200 and two shootoff rounds won Class A honors for him in that race two years later, and in 1960 he shot as part of the winning Pennsylvania team in the State Team Race.

Long’s first state championship was the doubles, which he captured in 1936. He repeated as twin-bird champion in 1942 and 1946, annexing the all-around that latter year and again in 1948. In 1951 he was handicap champion.

Long secured his state’s ATA veteran singles title in 1978, and two years later he earned the ATA trophy in that category at Eastern Zone.