George Kleinman of Chicago won the first challenge in the early 1890s. The medal was contested until 1902 when J. A. R. Elliottdefended it for the 5th and final time. He won the medal in 1899 by defeating Rolla Heikes 95-94. 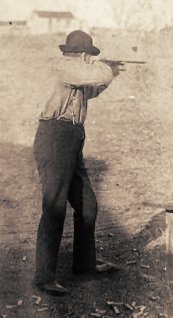 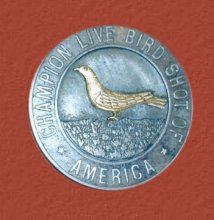 This medal was emblematic of the live bird championship of America, the contest being at 100 live birds (pigeons). The idea of the medal originated with Doc Carver, and plans for placing it in competition were perfected in Chicago in the early 1890s. John L. Brewer and other notables being present with the originator at the time. The first shoot was an open one, held at John Watson's Park, Chicago, and was won by George Kleinman, a local celebrity. Doc Carver challenged the winner and took the medal and forfeit of $25.00 by default, refusing to allow Mr. Kleinman three days of grace to recover from an illness which had confined him to his bed. Charles Grimm immediately challenged Carver and defeated him. The writer has been unable to get a complete record of this trophy. Early in its history the contests for possession were numerous, but of late years, owing to the decline of live bird shooting at the traps, the interest has died out, and the trophy is now in the possession of Mr. J. A. R Elliott. (The HOF obtained the long lost medal in 2001)