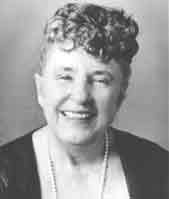 Nadine Ljutic began attending Grand American tournaments in 1952, when she married Al. For the first 10 years, Nadine went as a spectator and helped sell Ljutic merchandise.

Nadine, who has a masters degree in physical education, was a swimmer and diver in college, and her competitive nature made her want to try trap also. Busy with children Loretta, Joe and Jimmy, Nadine postponed getting involved in the sport until 1962, when Al, Dan Orlich and Joe Devers started coaching her. She began shooting seriously in October, and the next year she won the first of her 12 state women’s titles and 13 Grand American trophies.

During the 1963 Nevada State Shoot, Nadine captured the women’s crown for 192, and she also earned category honors in the main handicap. Nadine represented the state in the Champion of Champions event at the Grand American and posted a 97 plus 22 extras to finish third among ladies.

The following year, Nadine repeated as Nevada’s women’s champion, this time with 189, and she paced ladies in the main doubles as well. Nadine captured two women's titles at the 1964 Grand American—in the Clay Target Championship with 196 and the Champion of Champions race with 97 and 24 extras. Nadine posted a 185 in the 1965 Nevada Singles Championship to win her third consecutive women’s crown in that state. The following year she began competing as a Washington resident. Nadine represented Washington in the Champion of Champions race at the 1968 Grand American, and she downed 99 to place first among women.

At the 1969 Washington State Shoot, Nadine won the women’s crown with 185. At the Grand that year, she collected ladies’ trophies in Preliminary Friday’s and Saturday’s handicaps with 95 and 96, respectively.

In 1970 Nadine captured the Washington women’s title with 195, won the Western Zone ladies’ crown with 194, and was the women’s A champ in the Grand American Class Doubles with 89.

During the 1972 Grand American, Nadine became the first woman to post a 200 in the Clay Target Championship, capturing both the woman’s crown and the second-place Class A trophy. That year she also reclaimed the state and zone ladies’ titles for 193 and 188, respectively.

Beginning at that Grand, Nadine set a women’s long-run record of 419. In Monday’s class event, she missed the 15th target on her sixth field then ran the final 60 of the race, 100 in the Champion of Champions contest and 200 in the CTC. On Sept. 2 at Yakima, Wash., she broke 50 more straight then nine for a new registered high mark.

In 1973 Nadine again won the Washington women’s title, this time with 194. The following year she finished second in the category and represented the state in the Champion of Champions race at the Grand American, where she was women’s runnerup with 99 and 50 extras.

She snared the 1975 Washington ladies’ crown with 198, a record at that time, and at the Grand that year she was the women’s champ in the Trap and Field Handicap with 95.

In 1985 Nadine captured her 12th state championship—the Washington women's crown with 193. That year she also won her 13th Grand American trophy—ladies’ runnerup in the Clay Target Championship with 197 and 24 in shootoff.

In addition to state, zone and Grand competition, Nadine participated in the Golden West Grand in Reno, Nev. Her trophies included women’s runnerup in the main singles in 1974 with 192 and in 1977 with 195.

Currently, Nadine works in the family gun business. She started out in 1952 "just helping with the phones." and now she is general manager.