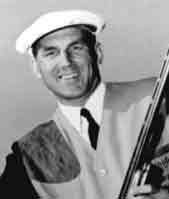 Ohio native Tom Frye was a highway patrolman when he stopped trapshooting star Joe Hiestand for speeding. Sometime after, Tom joined the ranks of registered shooters, he enlisted in the armed services during World War II and found himself, as a lieutenant, reporting to Capt. Joe Hiestand. After four years in the Air Force, he joined Remington Arms and worked in Ohio and Los Angeles until his transfer to Billings, Montana where he retired in 1973.

In 1950 the ATA life member captured the first of his eight Grand American industry trophies, the Clay Target title with 199. He fired an 86 in the 1955 Preliminary Handicap to finish second among industry representatives. The following year, Frye claimed the industry crown in the Grand American Handicap for 94 from 24 yards and 23 in a shootoff. He shared category honors in the Dayton Homecoming with Tom Lynott following each having scored 197s. In addition, Frye paced other industry reps in the All-Around with 384x400 and the High-Over-All with 956x1,000. During the 1963 tournament, Frye regained the Clay Target title and earned runner-up laurels in the Singles Class Championship, both with scores of 200 straight.

The last trick shooter to be employed by a major arms and ammunition company, Frye often appeared on television shows demonstrating his expertise with a rifle and shotgun. March 1975 Trap & Field magazine carried this account: "Montana gunner Tom Frye gave a shooting demonstration on the nationally-syndicated Mike Douglas TV show recently, during which he etched the portrait of guest star Robert Goulet in aluminum with a .22 rifle. Frye also shot at wooden blocks and at small metal discs, about the size of silver dollars, thrown in the air by Douglas, Goulet and other show guests. Frye, who began shooting demonstrations more than 20 years ago, then showed his talent with a shotgun. He shot at heads of cabbage and at eggs and, finally, at some regulation clay targets."

Tom was especially famous for his silhouettes of Indian heads, many of which have been displayed at numerous clubs throughout the country. One Billings, Montana restaurant had a wall mural of a Western scene done by Frye with the .22 rifle. The Bureau of Indian Affairs sponsored Frye performances for children of several tribes, and he was adopted by the Shoshone and Crow tribes.

In October 1959 at Reno, Nevada, Frye established a marathon and accuracy world record by hitting all but six of 100,000 hand-thrown wooden blocks with a .22 rifle. He shot nine hours a day over a 13-day period while besting the record established by Ad Topperwein in 1907. Tom once held the 12-gauge skeet shooting long-run record, and in 1963 he had a trapshooting run of 800 in singles.

He passed away October 14, 1982 of congestive heart failure.