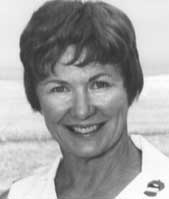 Punkin Flock has won 30 trophies at the Grand American, 11 Southern Zone ATA titles (including one doubles crown over the men), 15 Florida State championships (including one singles title over the men); led averages among women nine times (in all three types of shooting), an has been named to All-America team more years than any other femme trap shooter.

Mrs. Flock led Vandalia Handicap scoring among the women in 1958.

In the Grand American Doubles Championship, Mrs. Flock was the femme champion in 1958, two years after she was runnerup there. In 1959 and 1962 she was runnerup again. She earned women’ Class B recognition in the Class Double Championship in 1971, and the following year earned the AA prize in the same event. She topped distaff scoring in prelim-day doubles in 1968 and 1970.

Mrs. Flock topped women’s singles scoring for the Southern Zone ATA championship for seven of the 10 years between 1957 and 1968, and she captured another singles title in 1971. In 1963 she beat out the entire doubles field for that ATA zone crown with 96.

Mrs. Flock was named to the women’s All-America second team in 1954 and 1955, and from 1959 through 1976 she was a member of the first team, being named captain four times and co-captain three times, for an accumulation of 20 years as an All-American.

By the end of the 1977 target year, Mrs. Flock had entered 125,800 singles targets, second only to Hall of Fame enshrinee Mrs. Dorothy Marker in number of 16s registered by women. Mrs. Flock shot at the most singles targets in 1955 and 1970, and she headed the most-shot-at doubles targets for women eight times between 1959 and 1972.

In that potentially history-making GAH in 1972, Punkin Flock was down one in 75 and was holding her own for the championship (which was won that year with 99). She missed the seventh target on the last trap and hit a broken 97th bird but missed the good one. Her 97 was good for a yard punch that was a half-yard more than she needed to reach the 27.

Punkin Flock has won numerous AA trophies over the men at her state shoots, and in 1963 she was H-O-A victor over the entire state field.