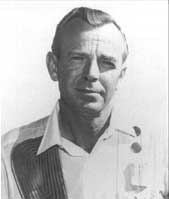 Lee Davidson began ATA competition in April 1961, and three months later he tied at 200 with four others for the Indiana state singles title. Davidson lost two birds in the first shootoff round and took home the Class A runnerup trophy.

At the 1962 state shoot, Davidson won the preliminary doubles with 99, collected the AA runnerup award in the class singles with 199, and earned HOA honors with 879x900. At the Grand American that year, Lee was the AA champ in the Clay Target Championship with 200 and 23 extras.

Davidson captured the 1963 Indiana singles crown after a five-way shootoff of 198s. During the Grand American that year, he tied at 98 for runnerup in the Doubles Championship and finished first in Class A.

As an amateur, Davidson earned berths on two All-American teams— men’s second team in 1963 and the first team the following year.

Davidson joined Winchester-Western as a sales rep in 1965, and from that time his name was dominant in industry ranks. His first Grand trophies as a rep came in 1966, when he netted the category awards in Preliminary Friday’s handicap with 94, the Doubles Championship with 98 and the all around with 386. The next year he posted back-to-back 100 straights to win industry honors in Prelim Friday’s and Saturday’s singles.

Davidson earned category trophies in four events during the 1968 Grand American: tops in the Introductory Singles with 200, Vandalia Handicap with 95 and HOA with 971xl,000 and 47 in overtime, plus runnerup in the Preliminary Handicap with 97.

At the 1969 Grand, Davidson was the industry champ in Prelim Saturday’s twins with 97 and the class doubles with 98. The following year he earned category laurels in the International competition with 95. and in ‘71 he matched that score to lead industry ranks in the Preliminary Handicap.

In 1972, Lee captured five Grand trophies. He placed first among reps in the Clay Target with 199 plus 25 extras, the International race with 100 and prelim Saturday’s doubles with 96 plus 20 in shootoff. He finished second in the Doubles Championship with 98 and 16 in overtime and third in the class twins with 96 plus carryover.

Over the next two years Davidson won four more Grand awards, including top industry honors in the 1974 Doubles Championship with 96.

During 1975 Grand competition, Davidson collected six industry trophies. He was first in the International Clay Pigeon Championship with 97 and 10 extras, Prelim Saturday’s singles with 100 and the Preliminary Handicap with 95 from 27. Lee came in second in the Grand American Handicap with 94. the class singles with 199 plus three overtimes and the HOA with 956x1,000.

Davidson annexed three more industry titles at the 1976 Grand—one in Prelim Friday’s doubles with 97 plus the class 16s and twins with 199 and 96, respectively. The following year he paced reps in the Preliminary Handicap with 93 and in the class singles with 199.

At the 1978 Grand American, Davidson collected industry honors in four events: the George S. McCarty and Ohio handicaps for 93 and 96, respectively, plus the Dayton Homecoming and Class Singles, both with 200. The next year Lee was category champ in Prelim Saturday’s singles with 100, the Clay Target with 198 plus 25 extras and the All-Around with 386.

Davidson also earned numerous industry awards in state shoot competition. During the 1977 Indiana tournament, he topped the category in the prelim handicap and twins plus the Doubles Championship. The following year, he netted six awards, including industry winner in the title handicap and doubles.

In addition to Indiana, Davidson competed in Ohio, where he was the amateur non-resident winner with 97 in the 1962 Handicap Championship. The Carlisle, Ind., native moved to Tipp City, Ohio, in the mid ‘60s, and he collected all five industry trophies at the ‘73 Ohio state tournament. In ‘78 he pocketed the industry prizes in the class singles and main yardage race. Davidson was inducted into the Ohio Hall of Fame in 1995.

The ATA life member had registered 50,700 singles targets at the end of the 1979 target year.

Davidson passed away Feb. 25, 1980, at age 54. At the time of his death he was district sales manager of Region II for Winchester.