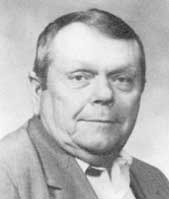 Larry's first Grand trophy was C runner-up honors in the 1970 Class Doubles. The following year he won Class A in the Dayton Homecoming with his first 200 straight.

Bumsted became the first at the Grand to break 100 singles, 100 handicap and 100 doubles all in one day. He did this on preliminary day Friday, August 10, 1990. During that Grand, he also was the first to break all 400 doubles targets on the program.

Larry's titles at satellite Grand Americans include 33 from the Southern Grand, eight from the Dixie Grand,16 from the Spring Grand and 21 from the Great Lakes Grand. At the 1988 Western Grand, he won the singles with 200 and placed third in the main handicap.