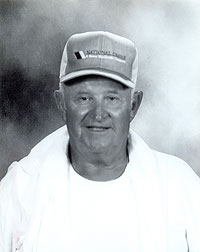 Seven years after he started registering targets, B. E. Morrissey claimed his first Grand American trophy by winning over all in the Ohio Handicap. From then on he placed on 18 All-America teams, starting with nine straight years and following up later with placements on five veteran teams from 2001 to 2005 and earning four senior veteran spots since 2006.

In his second year at the Grand he was runnerup in the Dayton Homecoming, with the next year garnering second-place in the High-Over-All. In 1975 he was champion in the President’s Handicap, runnerup in the TRAP & FIELD Handicap, and AA champ in the Class Doubles. The next year he captured the top spot in the Champion of Champions race, following with third in the Vandalia Handicap in 1977. In 1985 he placed fifth in the President’s Handicap. Three times he was a member of the triumphant Nebraska state team races, with a record-setting 997x1,000 in 1975 Class Singles. Other state team wins were in 1981 and 1983, and in 1985 he was a member of the winning Zone Team race.

Years later, back at the Grand, B. E. claimed veteran High-Over-All honors in the preliminary days and that age-group runnerup in the President’s Handicap. The year was 2000, and in 2001 he was back to collect the veteran title in the Grand American Handicap. A year later he was second in Saturday’s preliminary handicap and the next year won out over vets in two prelim races–Friday’s doubles and the High-Over-All again.

Morrissey, entering the Senior Veteran catergory at the 2005 Grand, won the runnerup spot in preliminary handicaps on Thursday and Friday also earning the H-O-A honors. In 2006 he was runnerup in Wednesday’s prelim handicap and followed with top honors in Thursday’s. He also won his category’s Doubles Championship.

Back in 1977 Morrissey was second in the Spring Grand championship singles and headed the all-around and the high-over-all the next year. Twenty-three years later, he was veteran champ in both the H-O-A and the all-around there. In the next two years he collected two handicap awards in his category and led senior vets in Monday’s singles, Friday’s handicap, and the H-O-A. Morrissey was also senior vet champ in the 2005 Central Zone Doubles. He captured 11 vet and senior vet awards in Southwestern Zone competition from 2002 through 2007. At Autumn Grands he won 10 senior honors from 2005 to 2008, and at the inaugural Heartland Grand he collected 10 more senior awards.

In Nebraska competition, B. E. won more than 80 trophies. His state titles included four singles, one doubles and four all-around championships, in addition to one each of those titles in vet and senior vet competition. Back in 1965, Morrissey broke his first 100 in singles at the Sahara GC, and five years later he had the third-high 16-yard average in the ATA. Inducted in the Nebraska Hall of Fame in 1978, from 1964 to 2008 he has registered 110,900 singles; 111,700 handicap, and 62,200 doubles.