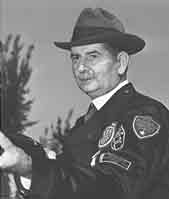 Forest McNeir battled a crippling accident to his hand and major surgery to become the Clay Target Champion with the lone 200 straight posted during the 1940 Grand American. A Texas building contractor, McNeir fell from the third-floor framework of one of his structures in 1936, crushing his left hand and all the wrist bones. He shot the 1937 Grand with someone loading his gun for him, earning one of 17 Grand American trophies collected over a period of 30 years.

In 1920 he was a member of the gold-medal U. S. trapshooting team at the Olympics, breaking the third-high score on the six-man team.

The first Grand American trophy McNeir earned was for heading the Edgewater Special on prelim day of the 1920 meet after a five-way tie at 100 straight. He was also runnerup for the Columbus, GA High-Over-All Cup that year with 759x800, while finishing high on 300 singles targets during that Grand with 295. Five years later he won the Consolation Singles, and in the 1928 Clay Target Championship he finished as Class A titlist. McNeir ended as runner-up in the 1934 CTC, was on the winning West team in the East-West race, and was also a member of the runnerup Texas five-some in the State Team Race. He secured runnerup spot in the 1935 Champion of Champions race after a five-way tie at 199, two years later earning the 18-yard trophy in the Grand American Handicap as a friend assisted him in loading his gun.

When McNeir ended as Class A high in the Class Singles Championship of 1938 after 199, Sportsmen’s Renew reported the feat as the return of "the Grand Old Vet" after his hand injury. In ‘39 McNeir placed third in the John Philip Sousa trophy competition during the Champion of Champions Race, and it was the following year (after extensive surgery and a long hospitalization) that he won the Clay Target crown. In 1945 McNeir secured the Special Veterans title on the first hundred in the Class Singles, and he repeated for that crown in 1948, 1949 and 1951, winning three of those times with 99s. In 1950 he placed sixth in the Grand American Handicap after a 99 from 23 yards.

McNeir earned Texas State singles championships in 1917, 1935 and 1936, and he captured the handicap crown in 1942. In 1948 he was the Southwestern Zone veteran champion.

McNeir received national recognition outside the trapshooting fraternity, being awarded the Carnegie Hero Award Gold Medal in 1910. (From the inception of the award in 1904 to 1980, just 19 Carnegie Gold Medal awards had been made.) According to Carnegie records, McNeir rescued a city fireman, whose foot had become trapped on a ladder "35 feet from the ground, opposite a window from which flames and smoke frequently belched." An electric wire had touched the ladder and was sending current through the ladder to the truck below. Two fireman were repelled, and the chief told others not to try a rescue. McNeir climbed the ladder but received a shock, knocking him to the ground unconscious. When he did that, however, he jolted the ladder, which freed the fireman’s foot. McNeir’s "hair was singed and clothing scorched," and he was disabled six weeks with "three severe scalp wounds and burns on his hands and face."

McNeir was one of the pioneers in establishing the ATA permanent headquarters at Vandalia, 0H and as a life member of the ATA, he carried card No. 79. He had competed in 40 states and 13 foreign countries, attended the Grand American 47 times, and registered 74,715 singles targets (after records were begun in 1923) before passing away at his Houston home in May, 1957 at age 81.