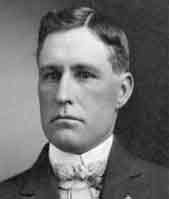 George Maxwell, who lost an arm in 1898 at the age of 32 in a hunting accident, began shooting trap in 1903, loading and shooting with just his right arm. Maxwell was from Hastings, Neb.

In Grand American competition, Maxwell led the high general average on all targets (now known as the High-Over-All) at the 1908 tournament. That year he also tied for the second-high score in the Grand American Handicap and for the high score in the professional championship. In 1911 he topped the high general average at singles targets. Also, his 98 earned him high-gun honors in the Preliminary Handicap, and he tied for third in the professional championship.

Maxwell also headed the high general average at the 1909 Southern and Eastern Handicaps.

Employed by Remington Arms Company in 1904, he spent a number of years traveling the country attending tournaments, visiting almost every state plus Canada and Europe.

He was a member of the Remington-UMC squad that included Annie Oakley, Frank Butler, Tom Marshall, Col. J. T. Anthony and W. H. Heer. This group gave exhibitions at many Southern cities. He was also a friend of and shot with John Philip Sousa, 1985 Trapshooting Hall of Fame enshrinee.

Maxwell became interested in hunting during childhood, and he turned into an expert shot. At the age of 15, he traveled throughout Nebraska and nearby states to compete in shooting matches with men many years older.

"Mr. Maxwell was one of the fastest shooters ever known around here," said Sheriff Worthy Wood, who was acquainted with Maxwell through the Hastings (Neb.) Gun Club. "He used a heavy gun, weighing nine pounds, but he worked with one arm faster than any two-armed shooter I have ever known."

In his 22 years of competition, Maxwell averaged slightly over 95%. He was a member of the Okoboji Indians and held the title Chief Right Wing.

In his obituary in Sportsmen's Review (Trap & Field's predecessor), he was called "one of the most widely-known shooters on the road." It was also noted that he was often followed at tournaments by spectators, who enjoyed watching him shoot.