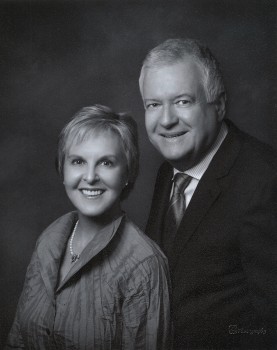 Dieter and wife Betty of Krieghoff International, Ottsville, PA, are being inducted as contributors to the sport and longtime supporters.

Dieter represents the fourth generation of the Krieghoff family business. Around 1956 an American/German partnership had the legal building rights and blueprints to the Remington 32 shotgun. Krieghoff began manufacturing the K-32, improving the original design. By the late 1970s, Krieghoff was able to acquire full rights and eventually renamed the gun the K-80.

In the summer of 1979, Dieter signed up for a clinic so he could meet Kay Ohye, who was shooting a K-32 for doubles. Dieter was shooting a prototype unsingle K-80, hoping to generate interest in the Krieghoff competition shotgun line in the U.S.

In 1980-81 the two began traveling the trapshooting circuit while discussing fine-tuning the evolving K-80. Kay invited Dieter to New Jersey to continue to work on the K-80 from a workbench that Kay had set up especially for Krieghoff. In 1986 the Krieghoff family decided to establish Krieghoff International Inc. as its own entity in the U.S. The company selected its location in the Bucks County area in Ottsville, PA.

Dieter joined the ATA in 1979 and became a life member in 1981. During his travels on the trap circuit, Dieter won a gold ring in a 1979 Bob Taylor handicap event.

Betty Newman Krieghoff grew up in a gun-friendly family in Kinston, NC. She graduated nursing school and was head nurse in a cancer ward. Betty was invited to the historic Pinehurst GC, and the first round she shot was skeet with a 20-gauge Remington. She enjoyed it and bought the gun. Betty joined the ATA in 1980, becoming a life member in 1984. She liked trap so much that she got involved with the entire workings: scoring, administration and the association work.

In 1982 at the Maryland State Shoot, Betty shot her best score ever—a 98 in the Handicap Championship. She tied for open winner, and after shootoff, she ended with the women’s trophy.

Betty’s traveling friend had met a trapshooter during this time, and he had a friend [Dieter] to introduce to Betty at the Eastern Zone Shoot at Elysburg, PA, that year. They hit it off, and Betty moved to New Jersey to start with the company on the ground floor, working alongside Dieter. Betty went on the trapshoot circuit as well. She won the open women’s trophy at the New Jersey State Shoot in 1985. Dieter and Betty married in 1988.

The Krieghoffs continue to share a passion for shooting, hunting and the clay target sports plus a consideration for the ATA shooter and his needs as well as the governing body associations. Krieghoff has donated guns to the Trapshooting Hall of Fame Silent Auction and NRA for fundraising over the years. The Krieghoff Challenge at the Pennsylvania State Shoot draws over a thousand competitors for the chance to win a K gun. Krieghoff has also been awarding Trapshooting Hall of Fame scholarships since 1999.

The Krieghoffs are life members of the ATA, NRA, NSCA and NSSA, and the company has a presence at many shooting venues every year.