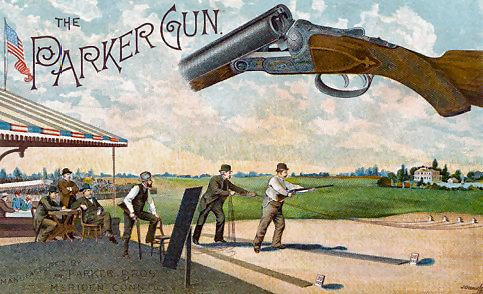 This early Parker trade card, circa 1893, is a great interpretation of an early pigeon shoot. Note the Parker plunge traps and the long cords to the puller. According to Ed Muderlak, author of Parker Guns, the Old Reliable, the card shows us a lot more. The shooter is Parker super salesman A. W. Du Bray. The man poised and ready to pull one of the cords attached to the trap is another Parker salesman, S. A. Tucker. Man in the brown coat under the tent with his hands folded is C. W. Budd, a Parker shooting pro. Pigeon shooting in the 1890s was a national sport attracting huge crowds, national publicity and large jackpots for the winners and the gamblers. It certainly rivaled major league baseball.

In an old English publication "Sporting Magazine" came the first mention of trapshooting as a sport. The year was 1793 and live pigeons were used as targets.

Nineteen years later in 1812 in a London suburb the first live pigeon-shooting club was born. It was called the "Old Hats Tavern". The old hats were used as boxes in order to launch the pigeons. This was when the expansion of this sport first started.

Evidence shows that trapshooting (in this case live bird shooting) was first contested in this county at the Sportsmen's Club of Cincinnati, Ohio in 1831, nineteen years after the "Old Hats Tavern" in England. Trapshooting with inanimate (clay target) targets was still a half of century away.

They probably used Passenger Pigeons or Sparrows for targets. Recently, a 1836 sterling silver trophy from this club surfaced. In 1840 the New York Sportsmen's Club held their first championship at live birds. This was the start of the many state shoots in America today. Many early state shoots held pigeon shoots in conjunction with their clay target

The term "trapshooting" comes from the old pigeon rings of long ago where the birds were released from ground traps with long cords attached to the trap. The shooter, standing about 28 to 30 yards (depending on the gunners known ability) from the trap, would call “PULL”, meaning the trapper would pull this long cord to release the bird from the ground trap. One of the earliest of these traps (called a plunge trap) was developed by Wilber Parker, one of the brothers who designed and produced the famous Parker shotguns.

The first American champion was Captain A. H. Bogardus from Illinois. One the greatest pigeon shooters of all time, Bogardus would accept a challenge from other pigeon shooters for a one on one match before large crowds and with large stakes. Thousands of dollars would change hands as spectator betting on each shooter was common. One "lost" pigeon could spell disaster for the gamblers as well as the gunners.

Bogardus was also a great glass ball shooter. Glass ball shooting closely coincided with the history of pigeon shooting. The first glass ball tournament was held in Boston around 1866. It's popularity declined around the time of the invention of the clay target in 1880. By the time of the great pigeon shooters of the 1890s and early 1900s, Bogardus was no longer a factor as age eroded his shooting skills. However, if one were to list the three top pigeon shooters of all time he would make the cut along with J.A.R. Elliott and Fred Gilbert.

The most famous of all pigeon trophies was the Cast Iron Medal which Elliott retired in 1902.The medal was recently discovered after it had not been seen for over 100 years. It now resides in the Hall of Fame in Vandalia. Elliott held every major live trophy ever entered into live bird shooting.

To promote clay target and live pigeon shooting the manufacturers of guns, shells, power, shot and other sporting products organized the first national shooting organization in 1889.

Their motive was simple; to promote the sales of their products. It was called the American Shooting Association. The Interstate Manufacturer's and Dealers’ Association was organized in 1892 by many of the same companies and men. By 1895, the name was shortened to The Interstate Association. Like the old American Shooting Association, the new organization was made up of the gun, shell, shot and powder company manufacturers (professionals) for the "encouragement of pigeon and trapshooting".

The American Amateur Trapshooting Association (AATA, 1916-1919) formed on December 23, 1915 with John Philip Sousa as president. This was the first attempt to have a national organization organized and run by amateurs. Sousa would serve as president again in 1918. This new association was the first attempt at amateur control and did not replace any other organization.

The first order of business of the old Interstate Association was to organize and hold a national pigeon shooting championship to be known as the Grand American Handicap. Tom Marshall was the only two time winner, winning in 1897 and 1899. The tournament lasted ten years, from 1893 to 1902. By 1900 more and more newspapers and folks living in the urban centers of the country were calling for an end to the "cruel" and "barbaric" sport.

Actually, these rumblings started many years earlier around the time that George Ligowsky invented the first clay target. It became so loud and angry at the turn of the century that the Interstate Association started a inanimate (clay target) Grand American in 1900 and discontinued the live bird championship after the final shoot in Kansas City in 1902.

The end of the era didn't come quickly. The sentiment among the "do-gooders" about the senseless slaughter of the "beautiful pigeons," spelled doom for Elliott and others like him who made their living at pigeon shoots. The women who opposed pigeon shooting wore in their hats the plumage of birds killed solely for their feathers. And likely they rode behind a pair of docked horses, knowing that docking horses' tails was a cruel practice, too. But it mattered not; the great pigeon shooters including Elliott and Gilbert had been effectively put out of business when state after state passed legislation outlawing pigeon matches.

With the final Grand American at live birds in 1902, the era of pigeon shooting came to an end. For many of the great pigeon shooters, their income was greatly reduced. They could no longer make money and an affluent living in the pigeon rings across America. Traveling in lavish railroad cars, dining on the best food, shooting the finest shotguns and living in the best hotels was over. It was not an abrupt end but a slow death as many states started to outlaw pigeon shooting over the next several years. Today pigeon shoots are outlawed in most states.

In 1900 at the Olympics in Paris, France, live pigeon shooting was a medal sport. It was the only Olympics that allowed live pigeon shooting. Leon de Lunden of Belgium killed 21 pigeons to win the gold medal (actually, no gold medals were given. A silver medal was awarded for first and a bronze medal for second). The 1900 Olympics were also the first year for clay targets with Frenchman Roger de Barbarin the winner.

Read more about these legends: (Dick Baldwin's "Road to Yesterday") 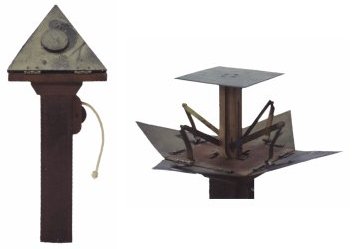 Parker Plunge Trap. Left side the trap contains a pigeon Right side shows the trap open and pigeon is forced upward. Trap dates to 1874.

Fred Gilbert held every major pigeon title except the Cast Iron Medal, losing once to Heikes and twice to Elliott.

J.A.R. Elliott retired the Cast Iron Medal in 1902 and held every Pigeon Trophy at one time. 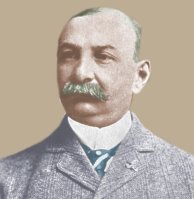 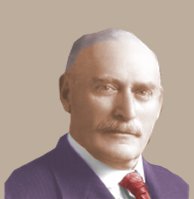 Rolla Heikes, winner of first Clay Target GAH in 1900 and winner of the Cast Iron Medal over Gilbert in 1898. 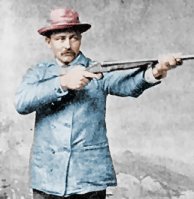