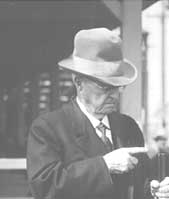 Fred Kimble, inventor of the choke-bore shotgun in 1868, was born in Knoxville, IL in 1846 and still was an active member of the Union Pacific Gun Club when he was 90 years old.

Mr. Kimble’s invention, which revolutionized shotgun shooting, was prompted by veteran market hunters who were jealous of the straight-pointing younger man’s marksmanship. They would taunt the 130-pound, 22-year-old any way they could, one day lining up on both sides of Kimble and shooting at every duck that came within a mile of his blind. At night Kimble would lie awake thinking of ways to outsmart his tormentors. He explained the greatest of firearms inventions to Jimmy Robinson years ago in his Los Angeles apartment:

"I started experimenting in the gun shop of Charlie Stock in Peoria. At first I used musket barrels, left over from the Civil War, as they were heavy and would stand a lot of boring. Then I procured regulation gun barrels to bore after I had obtained results by repeatedly boring and calipering. After I had finished boring the 6-bore, I found I had a gun up to 80 yards. I used six drams of coarse grain powder and No. 3 shot, 1½ ounces. This gun would shoot through an inch board at 40 yards. The velocity up to 40 yards was very great; at 60 yards it slowed down to one half and at 80 yards it had slowed down to another half." The first gun he bored like this put the entire charge of shot in a 24-inch circle at 40 yards.

Being satisfied that his gun could outfire any other in the country, Kimble started trimming the market hunters and also began his climb as an outstanding live-pigeon, glass-ball and clay-target shooter.

He visited his first live-pigeon shoot in 1872, the Illinois State championship. Using a 9-gauge, choke-bore muzzle loader (breech loaders were the favorites in those days), he tied with Capt. A. H. Bogardus. After three shootoff rounds at five birds each time, they still were tied with 15 straight. They divided the money and were declared co-champions. Kimble won the State medal and the Dead Shot trophy at the shoot. The next year Kimble won the state championship, state high average, state and Dead Shot medals.

At the Iowa State Shoot in 1880, Kimble broke 135 straight clays, hit 36 straight live pigeons and scored 53x55 on glass balls, giving him the high-over-all with a score of 224x226. That same year he shot at Peoria, Minneapolis, St. Paul and Winona, MN and broke 735 straight glass balls in 13 days.

In 1884 Kimble invented the first composition target under the trade name of "Peoria Blackbird." It was a combination of coal tar, pitch and other ingredients. Kimble was also talented in other fields. At the age of six he was a child prodigy on the violin, appearing on stage in a San Francisco theater at a weekly wage. In later years he painted hundreds of outdoor pictures and invented the mallard duck call. He also at one time was the world record checker player.