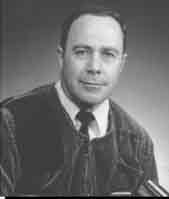 Starting as a junior shooter, Ken Jones won three state A.T.A. championships over his elders, plus three state junior singles crowns. As an adult he captured one state title in Texas, four in Oregon, and six in Washington. He also led in A.T.A. Southwestern and Western doubles once in each division.

Jones earned his first Grand awards in 1958 when he captured junior laurels in both the Introductory Singles with 197 plus 50 in overtime and the Doubles Championship with a 91. The following year he posted a lone 100 straight to secure the junior Champion of Champions crown.

Ken was 24, an airman first-class and a fourth-year member of the Air Force marksmanship unit when he attended the 1966 Grand. He had shot the world’s International championships in Wiesbaden, Germany, July 17-19 that summer and his 100 straight (a rarity in International shooting) on the final day won for him the individual world championship with a record 297x300. (The U.S. was earning the trap team title on the first two days with 768x800).

The next month, on August 24 in Vandalia, Ohio, eleven shooters tied with perfect 200s for the Clay Target Championship of North America. Ken smashed another one hundred to earn the crown.

The following year Jones broke 200 in the Dayton Homecoming, ending as runner-up after a three-way tie.

Ken went to work for Hal duPont’s Krieghoff company and shot as an industry rep from 1968 through 1971. During that time he captured 11 Grand trophies and in 1968 he secured rep singles honors on preliminary Friday with 100 and 25 carryover, plus the doubles win on preliminary Saturday with a 97. In Sundays International Championship he won the industry prize with a 99, matched by only one amateur in the field. His 200 in Class Singles was tops among reps. These were just the beginning of his many wins as an industry representative.

Ken was the sixth in the A.T.A. to achieve a Grand Slam (200x200 in singles, 100 from 27 yards in handicap and 100 in doubles). He completed it September 18, 1969 with 100 from the maximum at the Sahara-Mint Club in Las Vegas. He was the 10th to break 100 from 27 yards. Six weeks earlier he became the 58th person to accomplish a perfect doubles score of 100x100. Jones became the fifth to break a 500 straight in a singles marathon, a feat accomplished at the Cottage-Grove-Eugene club in Washington where he had broken 499 the month before.

Jones’ All-America team placements totaled 11, beginning in 1958 with the junior team and continuing through four men’s teams and four industry ones, ending in 1972.

Ken and his dad both started competing in 1954 after Ken’s brother Lawrence Jr. had been shooting for several years. Dad Lawrence said at the time "No sense just driving Larry around."

Ken Jones interest in trapshooting has been renewed recently since son Dale began registering targets. Washington junior singles champion in ‘91 and ‘92, Dale scored his first 100 straight at the 1991 Grand American in the Champion of Champions race, the same event his Dad Ken had won 31 years earlier with a perfect score also. The Joneses now reside in Tenio, Washington where Ken is associated with Far West Sports.