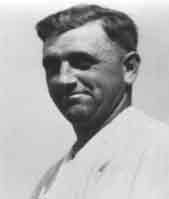 Walter Beaver set a record in winning the Grand American Handicap—becoming the first to win it from so far back. In 1933 he broke 98 from 25 yards, then was perfect in a one-round shootoff over Hall of Famer Ned Lilly to capture the big title. Beaver also won the North American Clay Target Championship twice, in 1934 and 1946.

He had tough going in the Keystone State because of the competition of Hall of Famer Steve Crothers, but Beaver won his state singles championship in 1934, 1938 and 1947. That first year he also won the doubles and was one target away from the handicap win with 97. His 1938 victory was with 200 straight. Both his North American Clay Target Championship triumphs were with 199.

At the 1933 Grand, in addition to becoming the GAH champion, Beaver was on the winning Eastern Zone team, and he ended as high on the 1,300 program targets with 1,245, two ahead of runner-up Joe Hiestand, also a Hall of Famer. Beaver led ATA doubles averages in 1938 and 1939, and his many other championships include the T. Clarence Marshall marathon in Yorklyn, Del. in 1939 with 494x500. He was picked for All-America first-string honors seven times (in the years when only six or seven were chosen), and he was on the second team twice, in 1942 and 1946. Walter Beaver fired at 72,700 16-yard targets in his shooting career.