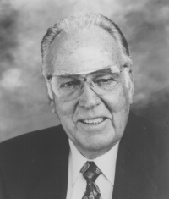 Bill Hunter of California registered his first targets in 1966. From that point forward he became enamored with the sport and its people and has become known far and wide for his support of every aspect of trapshooting. Whatever need that Bill recognizes, he voluntarily tries to fill it. From supplying free doughnuts and coffee at gun clubs, to giving parties in honor of trap help, from furnishing trophies and awards for shoots, or donating ATA life memberships through the Trapshooting Hall of Fame are merely a few of the ways this gentleman expresses his feelings for the sport which he holds in such high regard.

Born in Missouri, Bill began his career with Hunter Woodworks in 1945 after serving in the Army Air Forces during World War II. He was introduced to trapshooting by uncle George Hunter. At the end of the 1995 trap season, he had registered 107,400 doubles, 116,900 handicap, and 56,500 singles targets during his 29-year shooting career.

He served as a California Golden State Trapshooting director from 1969 to 1976. To promote trapshooting in the State of California, Mr. Hunter developed and produces a calendar of shooting events which he distributes to every registered shooter in the state. This yearly shoot calendar also includes a directory of business services owned and run by trapshooters, for their promotion and for the shooters’ convenience.

In 1985 Bill began donating Amateur Trapshooting Association life memberships to be awarded at registered shoots. Since then he has given approximately 1,000 of these memberships. For the past eight years (1988 to 1996) he has donated 100 each year. Sixty are awarded daring state and provincial championships, twenty during the Grand American. eight for satellite Grands and the Golden West Grand, five at division tournaments, and seven on a special request basis.

Mr. Hunter’s generosity is not limited to his home state of California but to any number of clubs who throw registered targets. His gift to shoot winners may be money clips holding crisp $20 bills, special recognition belt buckles, or 50 pounds of Scott Shot; or he might treat attendees to a barbecue dinner as his guests. On two special major fund-raisers for the Trapshooting Hall of Fame, Bill has either donated a Silver Seitz shotgun (jointly with manufacturer Jerry Phillips) to be sold for the benefit, or purchased a Seitz shotgun at auction for the same purpose----both occasions designated to honor the memory of two trapshooting Hall of Fame enshrinees, Robert W. Smith, and Frank Little. He also champions the Trapshooting Hall of Fame silent auction each year both with his gifts and purchases.

The complete support of Bill’s wife Ruthie and help of daughters Jan and Kim make the generosity a family affair. His philanthropy is not limited to the world of trapshooting but to a wide range of charities and civic organizations.

Bill has established the George Hunter Memorial trophy through the Hall of Fame for the high senior veteran in the Grand American Handicap in honor of his late uncle.

William Hunter was inducted into the California State Trapshooting Hall of Fame in 1994, and into the Iowa State Hall of Fame in 1995. ‘We’re not here very long, and if we cant make things just a little better while we are here, that’s part of our philosophy." reasons Mr. Hunter.