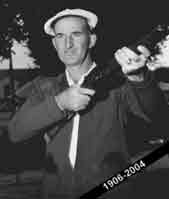 Joe Hiestand of Hillsboro, 0hio, began winning major championships in 1931, and 41 years later, while competing in his first Grand as a veteran, he captured three trophies in the over-65 age group, including the High-Over-All. Joe has been named to 21 Sports Afield All-America men’s trap teams, serving as captain from 1934 through 1936, in 1938 and later in ‘47 and ‘49.

Hiestand won more Grand American championships than any other person in the 73-year history of the event. He leads North American Clay Target competition with five wins, shares the Doubles Championship top spot with Hall of Famer Mercer Tennille (at four times apiece) and has captured the High-Over-All an unprecedented seven times.

He has served five years in the Ohio State legislature, and in 1973 will complete 18 years of service in government. In his legislative capacity, Joe has been active in fighting excessive gun legislation in Ohio. As a training officer in gunnery during World War II, he was responsible for teaching the fine art of gun pointing to aerial gunners.