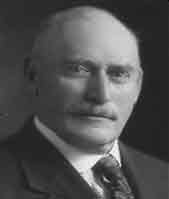 The "Daddy of Them All" was what they called Rolla 0. (Pop) Heikes. He went down in history as one of the few favorites ever to triumph in the Grand American Handicap when he won the first such event at targets in 1900. And he also became the only industry representative ever to win the GAH (it was closed to reps after the first year).

Heikes was born on Christmas Day in 1856 on a farm near Dayton, 0. and moved to Nebraska 21 years later. About that time he really began to set his name above other shooters, making his first public appearance on Independence Day, 1878 in Brownsville, Neb., where he took second place. On July 1, 1880 he made his first run of 100 straight, a record that he duplicated many, many times, but one, at the time, that was heralded all over the United States. He was using an 11-pound, 10-gauge gun and five drams of black powder.

At one time Heikes held more records than any other living shooter. He won the Cast Iron Medal (emblematic of the world’s championship at live birds) five consecutive times. One of the victories was over Fred Gilbert, 99 to 94, in which Heikes had a run of 50 straight and killed 95 of the birds with his first barrel. He also won the E. C. Cup five consecutive times; broke 500 targets in 37¼ minutes from five traps, using three ejector guns; and held the world’s record of breaking 100 flying targets in two minutes and 58 seconds, using four repeating shotguns. In the last Grand American at live birds in 1902, he was one of the 33 men who posted 25 straight, and he outlasted 30 others in the shootoff.

Heikes earned the title of "Daddy of Them All" by being head of the group of experts for a longer period than any other shooter. He was the first man to go on the industry representatives’ list as an exclusive shooter, taking a position in 1885 with the LeFever Gun Co.

Pop got his first lesson in the shooting game when he pointed an old pistol at one of his neighbor playmates. He was observed by his father, who immediately skinned off a sprout from a nearby tree and impressed upon young Rolla the slogan of "Safety First." "If there were more sprouts, there would be less accidents," Heikes later reminisced.

He was a member of the 1901 American team that toured Europe. In 1915 he won the professional championship at Chicago, and a few years later he became manager of a Chicago-area gun club.

"Chief Bald Eagle," as he was known among the "Okoboji Indian" tribe of shooters, died at the home of his son in Detroit on Sept. 23, 1934. He had attended 25 Grand Americans and shot for 55 years.