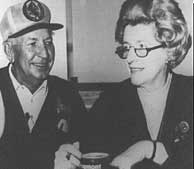 The Harrisons began shooting in Illinois before moving to California in the late 1940s. Each was inducted into the California Trap Hall of Fame in 1981. They now reside in Sandy, Utah.

Bill Harrison first registered targets in 1935 and amassed a total of 79,650 registered ATA singles targets by 1973, when he and Marian last competed.

During his 28 years of service to his state association, Bill helped bring California to a position of prominence in the ATA, at the same time helping to conceive and strengthen the Western Midwinter Chain.

Harrison earned his first Grand American award in the 1941 Preliminary Handicap. He was among 10 tieing for runnerup with 98. Firing from 23 yards, Bill snared third place in three innings with 72. He also won one of the most prestigious trophies of those days, the Guy Dering award, for his combined score on the Preliminary and Grand American handicaps. He totaled 193x200 and won a tie-breaker with 25 straight.

The two Dayton Homecoming trophies came in 1947 and 1958. The former year he beat out one in shootoff following 200 straight, and the latter year he entered the lone 200 in the race.

With his 1958 victory, he also received the Miller High Life Trophy.

In the first half of the 1959 Dayton Homecoming Championship Bill, Dan Orlich, Maynard Henry, Herman Peterson and Zip Eaton smashed all 500 to set a world record. One year earlier, four of them (all except Eaton) plus George Mosher had set a west coast squad record of 497. Harrison, Henry and Peterson had 99s, while Orlich and Mosher were perfect.

Thirteen years before the historic Grand feat, Bill shot on the winning Illinois fivesome in the State Team Race. His team had to win a three-way shootoff following a tie at 488.

At the 1961 Grand, Bill ended with the top Class AA award in Introductory Singles after four knotted at 200 for champion and runnerup spots. Two years later he finished fifth in A of the Class Singles, breaking 99 in shootoff after three tied for thud place with 198. He ended the week as co-winner of the A High-Over-All for 965x1000.

While living in Illinois, Harrison won the preliminary handicap at the state shoot twice. In 1939 he was the outright winner with 98 from 21, and in 1942, he won in overtime following 99 from 23.