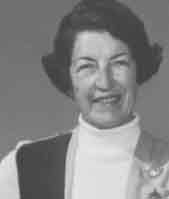 In 1970 Hortense Wood Hardesty became the second woman in ATA history to be handicapped at 27 yards, 30 years after beginning her shooting career in Utah. She earned one doubles and one all-around crown over the men plus 19 women’s championships there before moving to California in 1972, where she captured the feminine title with 198, her highest winning distaff score, in her fourth year of eligibility in the Golden State.

As a second-year shooter, she tied for third place at the Grand American "in a new race, the Women’s State Champions," finishing fifth in shootoff. Hortense earned another Grand American trophy in 1955 when she broke 192, the top femme score of the day, to head women’s Class A standings in the Class Singles Championship.

Mrs. Hardesty became the fourth woman in history to enter 98 in doubles, leading a December, 1968 race at Holladay, UT. She carded her second 98 during a prelim race at the 1971 Utah State Shoot, making her the initial woman with two such scores to her credit. She was one of the first women to enter 100 straight in 16s at the Golden West Grand at Reno, Nev., where she earned the distaff singles championship during the 1961 competition.

The initial woman to be president of a major gun club, Hortense served as head of the Salt Lake GC from 1960 through 1962. It was at her home club that she carded the scores which put her at 26½ yards and ultimately at the 27.