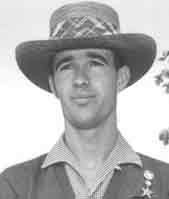 Larry Gravestock of Texas began shooting in 1953 and by May of 1964 had amassed more than 500 trophies. An eleven time All American, Larry earned 23 Texas state titles and 6 Southwestern Zone crowns before retiring from the sport in 1975. He also captured 30 trophies from the Grand American, received 7 consecutive Trap & Field All-Around Average Awards, and became the first to enter twelve 100 straights in doubles.

The first Grand for Gravestock was 1955 when he earned the junior Doubles Championship and High-Over-All crown. The next time he shot in Vandalia was 1957 when he and Dick won the Brother-Brother Championship. During his third trip in 1960, Larry placed first in the Introductory Singles with 200 and 50 extras and ended number one in A (then the top class) in the Doubles Championship for 98 and a perfect overtime round.

In 1963, his fourth trip to the Grand, Larry smashed 100 straight in Tuesday’s Special Doubles race for a two-bird lead over the field. He was the second amateur to enter a perfect doubles score at Vandalia.

Larry earned the Doubles Championship in 1971 with a lone 99. The same score the following year put him into a tie for runner-up honors.

In 1968 he ended second in the Introductory Singles and third in AA of the Class Singles, both with 200s. He was also a member of the victorious Texas state team that year. In 1970 he won preliminary Friday’s 16- yard race with 100 and 125 extras; the previous year Gravestock had annexed Class AA honors in that same race after 100 plus 424x425 shootoff and carryover. He earned the AA award again in ‘73 with 100 and 274x275.

His first of four Grand American Handicap race trophies was won in 1967 when he broke 99 from 25 yards to win a preliminary day race.

He secured the runner-up award in the 1970 Champion of Champions race with 100 straight and 99 in overtime. Two years later he tied for the ATA International crown with 100 forfeiting to settle for the first Lewis award.

Larry earned four of his state championships while still in junior ranks. He won the Texas All-Around plus the junior 16-yard crown in 1955, and the following year he bested his elders for the handicap and All-Around titles. He first won the singles crown in 1957, and he repeated with victories in ‘59, ‘60 and ‘68, two of which were with 200 straight. He earned the handicap title three times, and captured six doubles championships between 1958 and 1969. He annexed All-Around recognition nine times, matching the state record of 393 in 1963.

Top gunner in the Trap & Field All-Around Average Award standings for 1968, Gravestock also earned awards for the next six years finishing second, fourth, and fifth once each and third three times. He set five doubles records in his career. In 1969 he established marks in both 500- and 1000-targets marathons of 494 and 971 respectively. The record on 500 stood seven years, and the other remained intact for two seasons. He set a long-run twin-bird mark of 335 in July 1973, and that was not bettered until 1979. In the process he entered a one-day long-run record of 243, becoming the first to enter back-to-back 100s in doubles on the same day.

In May 1966, Gravestock entered the ATA’s sixth 100 from the 27 yard line, becoming the fifth person to accomplish the feat. In 1972, he became the third person on record to post a second perfect score from this yardage.

At the time he entered his 12th 100 straight in doubles in July 1974, Larry was the ATA leader by two over Dan Bonillas, three over Morris Stinebring, four over Britt Robinson, and five over Frank Little. Bonillas matched Gravestock’s mark in August but did not surpass it until September of the following year.

Larry has registered 72,100 singles targets in his career.

He was active in flyer shooting in the U.S. and other countries. In 1964 he placed fifth in the Italian Grand Prix in Rome.

President of the Texas Trapshooting Association in 1962-63, Larry Gravestock was inducted into his state’s Hall of Fame in 1980.