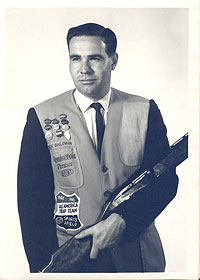 Richard Baldwin’s shooting career began when he was 11 years old and he remained active for nearly six decades. His first trophy at the Grand American was in 195l, the sub-junior title in the Clay Target Championship. He also was junior runnerup in the Champion of Champions race and was high junior in the Preliminary Handicap.

From 1957 to 1984 Dick worked in various capacities for The Remington Arms Co., including manager of advertising and shooting promotion. When he began his career, he was the youngest field representative of the company. He was able to observe most of the fine shots who had been competing for many years, and after his retirement Dick captured the essence of days gone by as he wrote accounts of their achievements. Some were published in TRAP & FIELD, and later he added many other stories, writing a historical book titled “The Road to Yesterday.“ With his great background in the sport he was named as Museum Director of the Trapshooting Hall of Fame in 2000 and helped the museum continue to grow until his death in 2006.

After his first industry trophy at the Grand American, Dick’s own shooting trophies began to pile up. He was runnerup in the Preliminary Handicap in 1961 and placed second in the 1962 Dayton Homecoming. In 1963 he captured the Doubles Championship and tied for the High-Over-All and All-Around. Two years later he was winning those two last-named big trophies plus was second in the GAH and the Doubles. In 1973 he was runnerup again in the GAH and in 1975 was second in the Prelim Handicap. Five years later he captured both the Class Doubles and the Championship, finishing the next year with first in Friday’s Prelim 16s and the Vandalia Handicap. No longer in the industry category, he was Class A runnerup in the 1988 Doubles.

While in industry Baldwin earned handicap, doubles and all-around trophies at the Spring Grand in 1977, 1978 and 1980. As an amateur he won doubles awards at the 1992 Northeastern and the 1996 Southern Grand.

In Eastern Zone competition, Dick was high junior in the 1954 singles and earned the 1956 all-around crown. From 1951 to 1954 he captured four junior championships in his homestate of Connecticut. He was a member of the junior All-America team for four straight years, beginning in 1952. Dick was the second junior to earn the 25-yard line (that was the maximum), and when he broke 99 in doubles in 1955 at Syracuse, N.Y., that was the high twin-bird score shot in the state at that time.

Baldwin served as the Connecticut Trapshooting Association secretary from 1955 to 1957, and he was enshrined in the Connecticut and the Eastern United States Halls of Fame. His registered total of targets was: 147,500 singles; 103,900 handicap, and 72,800 doubles.