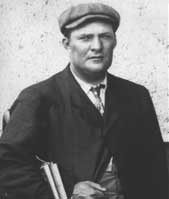 The "Wizard of Spirit Lake," as Iowan Fred Gilbert was known, set the pace among the industry representatives from 1901 until 1905, then missed a year because of illness, but came back again to lead the reps in averages in 1907. That was in the days of Rolla Heikes, Bill Crosby, Tom Marshall, J. A. R. Elliott and other top marksmen.

Gilbert first came into the limelight in 1895 when he won the DuPont Cup with 25 straight kills and a shootoff victory. He learned wing shooting as a boy around his home in the lake region of Northern Iowa, where his fame as a game shot became widespread in a local way. Tom Marshall, as the story goes, went to Spirit Lake, hunted with Gilbert and recognized the young shooter’s ability.

Marshall interested some men, prominent in the promotion of live-bird shooting, so Gilbert, and those men were instrumental in having Gilbert shoot for the DuPont Cup. Gilbert won the E. C. Cup (inanimate open target championship) by breaking 266x300 (including 50 pairs of doubles) in 1896 at Guttenberg, N.J., and among his earlier victories was one over J. A. R. Elliott in Kansas City in 1898 in which newcomer Gilbert had to come from behind to win. Elliott hit his first 79 and had Gilbert down three (all dead out of bounds) at that point. With only 21 to go, an ordinary man would have figured he was beaten.

But Gilbert was no ordinary man; he was the type who says "never die." And in this case nerve and stamina had their reward. In the last 21 birds Elliott lost three and Gilbert none to finish tied with 97. Gilbert won the shootoff. In all races at live birds, Gilbert stood at the maximum distance, 33 yards.

When the American team was selected to tour Europe and England in 1901, Gilbert—who had 10 runs of 100 straight that year, was named to the team. Four years later he broke 392 straight targets over a period of three consecutive days at his home grounds. During one six-day stretch he broke 1,178 of 1,200 targets for a .9812 average, and in a shoot at Council Bluffs, Iowa in 1908, he entered 197x200 the first day and 200 straight the second day.

Gilbert’s first major championship at inanimate targets came in 1908 when he posted 188x200 and won a shootoff for the rep championship at the Grand American at Columbus, 0hio. His average that year was .9503 on 10,945 targets. He repeated as rep champion in 1909, winning with a score of 193 at Chicago.

The championship targets included 160 singles at 18 yards and 20 pairs of doubles.

On the 20th anniversary marking Gilbert’s long stand as a top-notch shooter (in 1915), hundreds of gun clubs throughout the United States held Fred Gilbert shoots at which more than a million shells were fired in his honor. Four years later (1919) Gilbert showed that he still wasn’t finished as an expert shooter by breaking what was then a world’s record of 591 straight targets. That same year, in the rep championship at the Grand in Chicago, Fred missed two of his first hundred, then ran the final century to win with 198, after a score of 197 already had been posted.

Besides being dubbed the "Wizard of Spirit Lake," Gilbert was known in the shooting fraternity as "Noodles" and "Fritz." He was one of the early members of the original "Okoboji Indians" and was known among that tribe of scattergunners as "Chief Heap Talk." He died on Aug. 8, 1927.

Click here to see some of his many awards.