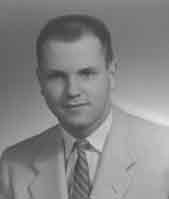 George Genereux was the 1952 Olympic Clay Pigeon (trap) champion at Helsinki, Finland. His 192x200 for the gold medal made him the first member of the Amateur Trapshooting Association and the second Canadian to claim the Olympic title (W.H. Ewing of Canada won in 1908 and Mark Arie of the U.S. won in 1920, before the ATA was founded.) The year prior to his Olympic triumph, Genereux had won the silver medal in the World Championships at Oslo, Norway. A teenager from Saskatoon, Sask., at the time of his international wins, Genereux later earned a doctorate in medicine and became a radiologist at the University of Saskatchewan in his hometown.

Before his Olympic victory, Genereux placed on three All-America junior teams, including the captaincy the year he went on to win the Olympics. He placed again on the team in 1953, and he then secured berths on the top men’s teams in 1956, ‘57, ‘60 and ‘62.

Genereux captured the Champion of Champions crown at the Grand American in 1956 following six shootoff rounds, and he ended third in the All-Around that year. A year earlier he was the top shooter in the Singles Class Championship, defeating Ned Lilly for the AA title in one extra inning after 200.

In 1951 George was the Junior Clay Target Champion and he headed juniors standings in the High-Over-All. The following year he captured the Junior Champion of Champions title and was junior runner-up in the Preliminary Handicap. All but the over-all were shootoff victories.

His first provincial title—the Junior Singles with 97x100— came in 1950. Three years later he was Saskatchewan’s doubles champion, and in 1955 he earned the ATA trophies for singles, doubles, and all-around championships. He repeated for the doubles and the all-around in 1956, ‘57 and ‘61, also winning the singles in ‘57 and ‘61.

"All in all, it was a tremendous experience, and one that I am only beginning to appreciate now. In man’s lifetime, he is given some good days and some bad days; there is no doubt that those two days were the most exciting and rewarding that I will ever see.

"The tournament was carried out over two days, with 100 targets being fired per day in relays of 25 per six-man squad. At Helsinki, there was only one trap. Thirty-nine competitors were entered, and this meant that 1 to 1½ hours passed before your squad came up again for the next 25 birds.

"Everybody save myself used either an under/over or a double-barrel gun; I used a trap-grade pump which I do not feel put me to any disadvantage at all, since many of us on this continent had been used to these guns for doubles for many years. We could use what was equivalent to ‘duck loads’ in those days, which meant that it was permissible to shoot the old Imperial shell. However, since the birds traveled so fast, it was imperative that one not only be prepared to, but actually fire both shells off every time, whether or not you hit with your first shot. This meant an awful lot of pounding over a two-day event, and consequently I stuck with a Canuck load 2¾x3x7½ for the first shot and used the Imperial 2¾x3¼x7½ for the "miss" or follow-up if need be.

"On the first day, I broke 95x100, which tied me with two others for third place. There was a 96 and a 97 in front of us; I cannot recall who these gentlemen were. On the second day, the early leaders were shooting first, and they dropped enough targets that I was sure they were out of the competition, at least as far as I was concerned.

"Everybody on the grounds knew what the total picture was, and consequently he was under considerable pressure when he started his last round. Knut went 23 straight and missed his 24th bird, thus giving me the championship.

"I can honestly say that I felt a bit sorry for him, but after realizing that my score was now tops, and that it could not be beaten, my mood changed rather dramatically. The final result was that Holmquist was second with 191, and another Swede, Hans Liljedah, was third with 189."