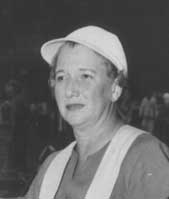 Frances King Garlington of Atlanta, Ga. was the only woman ever to break 200 straight to win a state 16-yard championship. She did it in 1952.

That same year Frances won the North American Women’s Clay Target Championship with 197x200, the Dayton Homecoming with 196 out of 200, the All Around, H-O-A and she was runner-up in the Women’s Champion of Champions race. The Kings made a clean sweep at the Georgia State Shoot that year. Frances won the singles, all-around and H-O-A, while Clyde captured the doubles and handicap. She topped women’s averages with .9559 on 4,700 targets and was named captain of the Sports Afield All America women’s trapshooting team.

The colorful Atlanta shotgun queen took up trapshooting in Fred Etchen’s shooting school in Atlanta in 1941. The late Clyde King Jr. wanted Frances and "Lil" Frances, their daughter, to learn to shoot so they could hunt with him in the field. Frances shot her first registered targets in 1941 and wound up with an .8 187 average on 800 targets. Her first major victory came at the 1946 Grand when she and Clyde won the Husband-and-Wife championship with 190x200, and she placed third in the Champion of Champions race. The following year she broke 189 out of 200 to become runner-up in the Georgia State 16-yard championship and several months later won the women’s Grand American Handicap with 97x100 from 17 yards. In 1948 Frances won the Southern Zone open handicap with 97x100, the all-around and H-O-A and the next year placed second among women in the GAH with 95x100. She finished the season with .9378 on 4,100 singles clays, fourth in the nation. Mrs. Garlington won the Georgia 16-yard championship in 1950 with 199x200 and the H&W with her husband, Clyde, when they fired 197 out of 200. She averaged 95% that year on 5,650 targets, third rating among women shooters. Frances again won the Georgia State championship in 1951 and 1952. (Also in 1952 she beat Clyde in a shootoff for the all-around, and he bested her in a tiebreaker for the handicap.) In 1957 she again won the women’s Grand American Handicap. After tieing for the Champion of Champions race six times, she finally won the crown at her last Grand in 1962 with 96 out of 100. (The three years she shot with the men in the CofC race, 1950, ‘51 and ‘52, she broke 98 and two 99s.)

Frances fired her last registered targets in 1963, winning the Peach State women’s championship for the 20th time. During her 23 years at the traps she shot 62,150 16-yard targets and approximately the same number of doubles, handicap and practice.

Upon the death of her husband Clyde, Frances became president and treasurer of the King Plow company in Atlanta. She has held many offices in organizations, including the Atlanta Girl Scouts, PTA Garden club, Atlanta Childs Home, Georgia Gladiolas Society and others. In 1950 she was voted into the Georgia Athletic Hall of Fame (1900-1950) with her friends Bobby Jones and Ty Cobb and was three times named Female Athlete of the Year by the Atlanta Journal Constitution. She was a member of the Sports Afield All-America team 10 times and is the donor of the Frances and Clyde King trophy for the winner of the Grand American Women’s High-Over-All.

In 1963, Frances married Ed Garlington, runner-up in the Georgia singles when she won with 200.