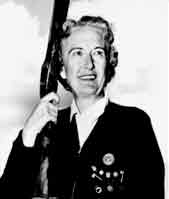 No other woman trapshooter in the history of the sport ever dominated it as Mrs. Lela Hall Frank did for a 14-year period between 1934 and 1948. During this time Lela was named to J i m m y Robinson’s Sports Afield All-America team nine times. (That was before Jimmy picked a separate women’s squad, and the outstanding feminine shooter was selected to the team each year.) She won eight women’s North American Clay Target Championships, led the women in yearly singles averages nine times, was the feminine runner-up three other times and finished third among the men in the Grand American Handicap.

She placed second among the women in yearly averages in 1934, 1935 and 1936 before moving to the top of the list in 1937, the year she became the first woman ever to lead her state in singles shooting. She topped all the Missouri men that year with a .9756 mark. She led the women’s singles averages six straight years before her shooting activities were curtailed in 1943. She came back to top all the women again in 1945, finished second in 1946 and again was on top in 1947 and 1948. In 1947 she also won the women’s Champion of Champions race at the Grand with a perfect score of 100 straight. A 98 had won that race for her at the 1942 Grand.

Lela holds the record for the highest finish by a woman in the Grand American Handicap. She won a shootoff of 97s in 1934 for the third-place finish. In 1938 she broke 98, a mark which never has been bettered by a woman in the GAH. Lela’s 98 also stood as the record for a woman in a major handicap race at the Grand until 1962 when Annette Schimenz broke 99 and finished fourth in the foot-way shootoff for the top spot in the Preliminary Handicap.

Mrs. Frank registered 52,350 singles targets in her 31 active years at the traps and averaged over 94 percent.

Lela’s determination as a competitor shone through in various ways. She often out-shot the men on her squad at the Grand. One of them—a five-time winner of the North American Clay Target Championship— was once asked, after Lela had beaten him, what it felt like to get beaten by a woman. "With Lela it happens so often, you get used to it," was his reply. Her determination was also shown in the manner in which she fought serious illnesses through the years. After a long bout with a near-fatal illness in 1943 and 1944, she triumphed again at the 1945 Grand American.

Retired from active shooting, Lela Hall Frank now lives in California and yearly donates an original oil— painted by her—to the winner of the women’s All-Around at the Grand American.