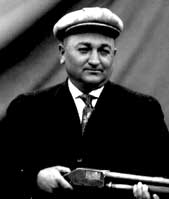 Mark Arie, one of the most colorful and popular trapshooters in the sport’s history, was considered to be one of the greatest handicap shots of all times. Born in 1883, Arie began his trapshooting career in 1905 when he entered his first tournament at Rantoul, Ill. and won top honors with 157x160. That year at the Grand, he hit 97 from 17 yards in the GAH, only two behind the winning 99.

Arie became the first Grand Doubles Champion in 1912 when he won the title with 89. A span of 22 years later, in 1934, he won his second Doubles crown. He was the first shooter to run 100 straight doubles from scratch when he broke the first 163 in a 200-bird race at the Great Western Handicap at the Denver (CL.) Municipal TC on July 18, 1926.

It was in 1920 that Arie added international fame to his list of accomplishments by winning the individual gold medal in the Olympics. He smashed 95x100 at Antwerp, Belgium. He was also a member of the U.S. group that won the team gold medal in the 1920 Olympics.

Arie decided to give it a try as an industry rep in 1921 but returned to the amateur ranks after one year. During the 1921 Grand, he tied for the professional championship.

At Iowa State in 1934. Arie was the second shooter to break 100 straight from 25 yards turning in his perfect score from the than maximum yardage. His all around total at that shoot was 395x400, an ATA record at the time.

On November 19, 1958, Mark Arie died at his farm near Champaign, Illinois.