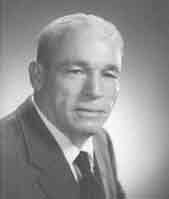 John R. Downes earned more than 200 trophies in 13 states, including several in Grand American competition, from the time he joined the ATA as a life member in 1953 to his induction in 1976. In 23 years he registered more than 164,000 targets and still found time to promote and further the sport. In 1956 he served as first president of the Texas Trapshooters Association, and the following year he was elected ATA delegate from Texas. In 1958 he was instrumental in organizing the Greater Houston Gun Club and served as chairman of the board that first year. Two years later he became ATA vice president from the Southwestern Zone, and he was elected president of the ATA for the 1964-65 term.

Twice Downes smacked 200 straight to win Texas State singles championships, first in 1964 and again in 1969. He also was Sunny South singles victor with 200 straight that latter year, and at the Grand American he tied for Dayton Homecoming honors with 100 in a row.

He has attended every Grand American since 1953, shooting targets at Vandalia every year except 1963, when a broken arm put him out of commission. In 1955 he tied for A in the Class Championship with 199. He lost in shootoff, capturing runner-up honors for his efforts. The next year he won a second-place prize again, this time during a preliminary-day handicap event. In 1967 Downes rejoined the winners’ ranks at the Grand, capturing the Veteran Clay Target Championship of America and the Veteran All-Around title. That same year he reached the 27-yard line, earning four yards in two years. He won two veteran doubles contests at Vandalia in 1968—one a preliminary, the other a special event. At the 1971 Grand American Downes headed AA veterans in the Class Singles Championship, and he earned vet Dayton Homecoming laurels with 100 and carryover. The next year he won veteran B in the Class Doubles and placed second in veteran All-Around standings.

Downes captured numerous zone and out-of-state honors. In 1955 he won the open Class A doubles title in Southern Zone competition. In 1968 he earned veteran honors after losing a shootoff of 200s for non-resident singles laurels at Oklahoma State, and two years later he was resident veteran singles and doubles champion at Southwestern Zone. The lion’s share of his out-of-state victories were won in Arkansas, Kansas, Louisiana, Missouri and Oklahoma.

Downes has been a member of the Veteran All-America Team for seven of the last eight years, missing only in 1972. He captained the team in 1968 and 1970.