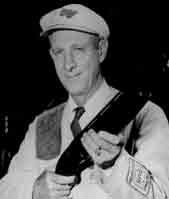 Cliff Doughman achieved prominence as an amateur from Morrow, Ohio before joining the ranks of industry representatives and later moving to Alton, Ill., to serve as shooting promotion manager of Winchester-Western for many years. Upon his retirement from there, he returned to amateur status and put his experience and knowledge of gun club operation to good use as manager of the Phoenix (Ariz.) Trap & Skeet Club. At the time of his induction, he was residing in Hudson, Fla.

Cliff Doughman’s initial major trophy came as an amateur, for seventh place in the Grand American Handicap of 1942. Four years later he was runner-up in the Doubles Championship, and in 1947 he captured the North American Clay Target Championship.

Cliff Doughman earned 39 major industry trophies at the Grand American—one in the Dayton Homecoming, four in the Introductory Singles, seven in the Class Championship, eight in the Clay Target, three in the Preliminary Handicap, two in the Grand American, five in the Doubles Championship, one in the Vandalia Handicap, five in the All-Around and three in the High-Over-All.

While in industry ranks, he outscored the field at the 1961 Golden West Grand Handicap, breaking 98 from 26 yards while the winner totaled 97 from shorter yardage.

Cliff Doughman was the sixth person in the ATA to break 100 straight in doubles, in 1961 at Camp Troy, 0hio.

In 1970 Cliff Doughman was in amateur ranks again, and he won the Arizona State singles and all-around titles. He repeated for those and added the doubles in 1971.