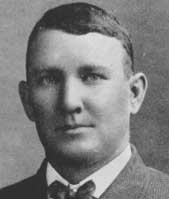 Were it not for William R. (T. Bill) Crosby, the little town of 0’Fallun, Ill. probably would always have remained in obscurity. Crosby, whose father was a native of England, was born in 0’Fallon on Aug. 27, 1866, and he brought a tremendous amount of publicity to the town for his shooting feats.

It was at the tender age of 13 that young Bill had his first chance to shoot at tournament targets, and he promptly showed his marksmanship. His father, who had shot trap in England, took Bill to a match in Illinois so the boy could watch his prowess, and young Crosby talked his father into letting him compete. In the 10-bird race for the gold medal the two Crosby's tied, and when "the old man" missed his ninth bird in the shootoff, young Bill had his first of many wins at the traps.

During this same year Bill was the second-high average competitor at the Illinois State Shoot. For the next several years he fired at glass balls, live birds and clay targets under the name of ‘W. Westfield," competing against many of the noted shooters of the latter 1800s, including Rolla Heikes, Fred Gilbert, J. A. R. Elliott, Doc Carver and many others. He held many of the important trophies of the time, including the E. C. Cup, DuPont Cup, Hazard trophy and Schmelzer trophy. He also held the Sportsmen’s Review trophy, emblematic of the wing shot championship of the United States.

By the time Crosby was selected as a member of the American team which was to shoot matches against the top shooters in England and Europe in 1901, he had become one of Americas top marksmen. In those international matches, Crosby led the first with 93x100, won the second with 95 and scored 90 on the third match.

It was during the tour that Crosby was chosen to uphold the American honors against the champion of Scotland in a race at 100 targets from ground traps and 50 from a tower. The tower was 14 feet high and targets were thrown parallel with the shooting station. Despite his unfamiliarity with such targets, Crosby managed to win the race by five clays.

Crosby was constantly among the top average Industry representative shooters, breaking 97 percent of his targets over the years, an excellent average in those days.

"T. Bill," short for ‘Tobacco Bill" because he always had a chaw in his mouth, was one of the 33 men who entered perfect 25s in the last Grand American at live birds in 1902, and he was the leading member of a touring team that shot in over 40 southern cities in 1904.