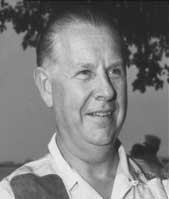 Born in 1920, Homer Clark started shooting at the age of eight, but was not allowed to enter competitive shooting until his father felt him properly trained in safety and he had proven his ability. Subsequently he began his ATA career registering clay targets at age eleven. During that year he smashed 100 straight at the Upper Alton (Illinois) Gun Club. Five years later at a large tournament he topped all competitors with a 97 in the handicap to win a car.

His Grand American victories began in 1934 at age fourteen when he broke 95 to win the sub-junior title in the Clay Target Championship, and continued with junior honors in 1935 and 1936. His first adult trophy came in 1939 with top A honors in Class Singles and tying for high on the total 600 singles. His wins continued in 1942 in Mondays handicap and in 1945 as a member of the winning Illinois team race, repeating the latter in 1946. Also in 1946 and 1947 he and his Dad copped the Parent-Child Championship. In 1947 he won the National Doubles Championship with a 97 and a three-round shoot-off. He had many Industry rank wins while associated with Ithaca Gun Company beginning in 1948. In that year he lead industry shooters in the high-over-all. He missed the 1958 Grand American to captain the U.S. International team in world competition in Moscow and returned home with a bronze medal. Amateur status again at the 1966 Grand brought Homer more honors and in 1969 he tied for the coveted Clay Target crown with 200.

More than any one man, Homer Clark Jr. is credited with getting shot-shell reloading started in the United States after World War II. It is chiefly through his efforts that components became available for the general public, and that early reloads were tested and data on results published, all accomplished in the face of objections to reloads in trapshooting.

His Alcan Company was incorporated in 1951 in Alton, Illinois where he developed loading data, published the information in a pamphlet, and distributed it widely at no charge. A short time later, he ran a one-month "special" in the American Rifleman of all components necessary to reload 1000 shotshells. While no profit was made on these low-priced specials, they introduced thousands of people to reloading. For several years, Clark offered free ballistic test services. Anyone could request loads to be tested for pressure and velocity. Following his company’s entry into marketing these reloading components they eventually produced entire shells including an innovative one of plastic. These pioneering steps through many years opened the door for a multitude of Homer’s fellow trapshooters to enjoy the sport more economically.

In addition to his trapshooting prowess, Homer set several flyer records, both in the U.S. and abroad. He served as 1978-1988 president of the United States Pigeon Shooting Federation. In 1949 he won the World Flyer Championship in Madrid, and two years later in Monte Carlo, becoming the only U.S. citizen to win this same honor twice. He is among four internationally to have repeated this win since the first tournament was held in 1930. Among other international flyer titles he won were one in Cuba and one in Italy in 1947; Grand Prix, World Flyer Championship, Estoril, Portugal in 1948 plus three cups in Madrid, France, and another in Spain the same year; EN Cup Championship of Europe in Belgium in 1964; six major championships, including the President’s Award in Madrid in 1970, and all five daily trophies and the High-Over-All at the 1978 Caribbean Championships. A medal of merit for shooting excellence was presented to Clark by the international shooting federation of France.

Homer Sr. and Homer Jr. celebrated a total of 100 years attendance at the Grand American in 1980. His father was inducted into the Trapshooting Hall of Fame when it opened in 1969. Homer Jr.’s induction marks the second father-son combination to be so honored.