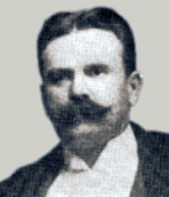 Even without his guns, W. F. (Doc) Carver was a big man, physically he stood six feet, four inches tall and weighed 265 pounds, a giant of a man by today’s terms and even more 50 in the late 19th century. He was a kind, modest plainsman who was known to make claims that would shock people until they saw him live up to them.

He began his career at the age of 17 when he left his Winslow, IL home (where he had been born in 1840) to seek the land grant of his grandfather in Minnesota. There he lived for several years with the Sioux and Pawnee Indians. It was during this time that the Santee tribe dubbed him ‘Spirit Gun" for his remarkable ability with his rifle. Later that title sometimes led challengers to grumble that his guns were "charmed," whereupon he would trade guns with his competitors and proceed to defeat them.

At age 35 Doc Carver migrated to California and became a famous buffalo hunter and a companion of Buffalo Bill Cody, Wild Bill Hickok, Gen. Phil Sheridan and other well-known figures of the day. It was during this time that Doc Carver became aware that men were making fortunes by shooting exhibition matches, and he was confident he could beat any of them. In 1877 he issued a challenge to shoot glass-ball and live-bird matches with anybody in the world. He defeated all United States comers and embarked on a tour of Europe. There he again defeated all challengers, now billing himself as champion of the world.

While on his European tour, Doc Carver was presented with a medal by the Prince of Wales. As a part of his performance before English royalty, Doc Carver broke 14 our of 15 glass balls in 15 seconds, then fired 16 shots with his repeater in four seconds. He broke 100 consecutive glass balls, then astride a running horse broke 28x30 single and double balls thrown for him. The Prince, enthused by his performance, bet that Doc would break 150 glass balls straight with a rifle. Doc ran 153 in 11 minutes—a new record—before missing.

During his tour of Europe in 1882, Doc Carver won $80,000 in cash in addition to many medals and trophies. He used $27,000 of the prize money to originate the Wild West Show with Bill Cody. In 1883, Carver was matched against Capt. A. H. Bogardus by the Ligowsky Clay Pigeon Co. in a 25-match series. He and Capt. Bogardus shot 100 targets each in 25 different cities, with Carver winning 19 matches, tieing three and losing three. Included in his 25 centuries were two perfect runs of 100 straight.

In 1885 Doc Carver undertook to shoot at 60,000 flying targets in six days. He began on a Monday—at his hometown of New Haven, Conn.—and by Thursday had fired at 64,881 targets, scoring 60,016 hits. Twice during the final day he broke 986x1,000. At age 55, Doc Carver was still defeating all comers, killing 100 straight birds in one match. An excellent animal trainer, he spent the last 30 years of his life giving exhibitions of diving horses and elks at fairs and carnivals. (His diving horses, trained by his daughter today, appeared on television in the late 1950s.) Doc Carver, the "Spirit Gun of the West," died in 1927 at the age of 87.