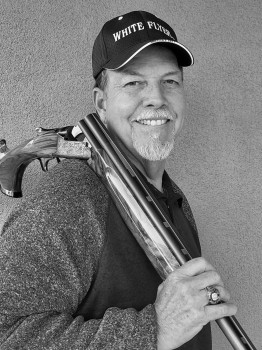 Gary Bonetti of Sacramento, CA, grew up around guns. He began shooting trap targets in the back yard when he was nine or 10 and joined ATA competition in 1973 at 12years old. He ran his first 100 at 14.

Gary attended his first Grand American in 1980, winning Class A trophies in two prelim singles events andthe High-Over-All. Eleven years later he broke 100 from the 27 in the Grand American Handicap, completing his ATA Grand Slam and Grand American Grand Slam. He tiedwith three others for the coveted title and ended runnerup after shootoff. That score helped him to a 398 total in the All-Around, securing him a Grand ring. In all, Gary has won 16 trophies in Grand competition, including high gunin the 1997 prelim Saturday doubles with 100. That is one of four twin-bird centuries he has broken at the tournament, and he has carded a 200 six times there. He was a member of winning Western Zone teams in the Zone team race in1996 and 1998.

At the 1996 ATA Western Zone, he won the Singles Championship with 200. His Zone sub-vet wins include the 2018 singles, doubles and all-around plus the 2019 all-around.

He has also collected trophies at the Southwestern Grand and Golden West Grand plus many other state shoots.

Earning All-American status seven times between 1990 and 2020, Gary has been a member of six men’s teams and one sub-vet.

He reached AA-27-AA status in 1989 and has earned his AAA-27-AAA pin as well. Gary is an enshrinee in both the California Hall of Fame and PITA Hall of Fame.

He was part of a squad that set the handicap record of 494x500 at the 1991 ATA Western Zone Shoot that stood for six years. He also considers the times he has appearedon the cover of Trap & Field to be special, and he has framed each one.

Gary has owned a construction company for 11 years, but he is now able to spend more time enjoying life than working.

“I’m very fortunate trapshooting was part of myupbringing. It has brought a light into my life. I wouldn’t be where I am today without it.”