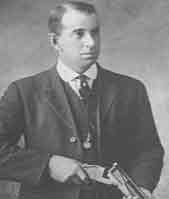 Just eight days after an 11-day return voyage by ship from the 1920 Olympic Games in Antwerp, Belgium, Frank won the Grand American Clay Target Championship — his second in a row. He was the first person to win twice, and the first of only three in history to earn two consecutive such crowns. Frank broke 199 and 50 in shootoff for the 1919 title, and his total stood as a record for six years.

At the 1920 Clay Target Championship event in Cleveland two deadlocked for the championship with 197, and Wright’s 25 in overtime cinched the title for him.

At the 1919 Grand he shot as a member of the victorious East team in the East-West competition. In 1924, the first Grand American held at the Vandalia grounds, Frank ended second in the Doubles Championship with 190 x 200. Two years later he finished as AA runner-up in the Singles Class Championships for 199.

The eight-member U.S. Olympic team left the country June 23, 1920, landing in England in early July for preliminary competition with the host country and several other visiting teams. The U.S. won 75% of the individual and team trophies, and Frank won his share of the honors. The American group of Frank Troeh, Mark Arie, Horace Bonser, Forest McNeir, Wright and Capt. Jay Clark Jr. won the six-man team gold medal with 547, 44 over silver medallist Belgium.

In individual competition which followed, U.S. shotgunners finished in the top five places. Arie captured the gold with 95, Troeh earned silver honors for two less, and Wright defeated Bonser and Fred Plum in overtime after 87 for the Bronze.

In 1914, Wright headed yearly trap association doubles averages with .8466 on 150 targets. He also earned the Eastern Division (Zone) handicap with 97 from 21 yards, finished seventh in yearly singles standings, and secured the Westy Hogans crown. In addition he excelled in the International Championship at St. Thomas, Ont. by being high on 400 targets. At the Canadian National Exhibition Tournament, he carded the top score on the first, third and fourth days plus the total.

He was enshrined in the New York State Hall of Fame during its 1984 inauguration.