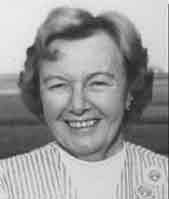 From 1950 through 1975, Rhoda Wolf earned 20 Grand American trophies, more than any other shooter from Pennsylvania at that time.

Mrs. Wolf also captured three Keystone women’s titles and the same number from A.T.A. Eastern Division meets. She was inducted into her state’s Hall of Fame in 1989.

Rhoda posted a pair of 197s for trophies in Introductory Singles and secured top women’s award in 1962. She was runnerup six years later.

Mrs. Wolf served as president of the Women’s Trapshooting League of Philadelphia, and as of the league’s 35-year anniversary (1963-64 season), she was the lone member to break 100 straight and had been high average winner five times.

A member of the Atlantic Indians, she was the first woman to enter 100 straight at one of that association’s meets. She was also the first lady to smash 100 at both the Doyelstown and the Quaker City clubs and to hit 50 straight during night shoots at Delaware River Gun Club.

She earned 100-straight pins at Tucson and Las Vegas, and in 1958 became the second woman to post a perfect 100 at the Golden West Grand in Reno. Stretching that to 150 straight she finished the race with 198, good for women’s recognition.

Mrs. Wolf, a former high school French and history teacher born in England, was in her early 40s when she registered her first targets in 1950. She passed away in 1982 at the age of 74. Surviving her was her husband Dr. Lewis Wolf, himself a trapshooter and gifted ophthalmologist surgeon and former president of the Pennsylvania State Sportsman’s Association.