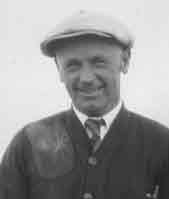 Frank M. Troeh learned marksmanship from his gunsmith father on the North Dakota prairies. In 1912 at the age of 31, he entered the ranks of trapshooters and immediately indicated he was headed for the top of the list by winning the tournament in which he was entered—from maximum yardage.

Troeh and Bart Lewis on

In 1920 Troeh was selected as a member of the U.S. Olympic team. Enroute to Antwerp, Belgium the team stopped in several cities, where Troeh set British records in both flyer and clay target shooting. He finished second to Mark Arie in the Olympics, despite a bone deep cut on his trigger finger. He also won a gold medal as a member of the victorious United States team.