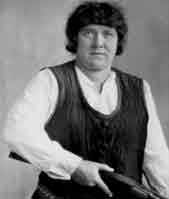 Elizabeth Servanty was working in a big gun company's plant loading ammunition when she was 18, but she never had fired a gun in her life until she met her husband-to-be, Ad Topperwein, three years later. Mr. Topperwein, appearing for the company in a fancy shooting act on the vaudeville circuit, gave the charming Miss Servanty some shooting lessons, and within a week’s time she was splitting playing cards held edgewise at 25 feet. This started her on the way toward becoming not only a pioneer trapshooter among her sex, but also one of the greatest—if not THE greatest—woman marksman of all times.

Her deeds with the gun were not the only things that spoke for her ability. She once was told by Annie Oakley that she was the greatest shooter of all times.

The Topperweins worked as a team professionally, making their first appearance as the famous "Husband and Wife Team" at the St. Louis World’s Fair in 1904. It was during her early shooting lessons that she acquired her nickname of "Plinky." After several failures while shooting at a tin can, she finally hit one and the bullet made a "plinking" sound. Each time she would connect she would invariably say, "I plinked it," and the nickname stuck.

Mrs. Topperwein’s style of shooting was one of unstudied grace and ease, without any effort and apparently without any thought as to where and at what angle the target would go. She used a repeating shotgun and on many occasions, while giving her exhibitions, would break four targets thrown in the air simultaneously.

In 1904 she became the first woman to break 100 straight at trap, a feat which she was to accomplish over 200 times in her career. She recorded fourteen 200 straights before the days of registered shooting. Plinky set an endurance record at Montgomery, Ala. in 1916 by breaking 1,952 of 2,000 targets thrown for her. Time for the event—five hours and 20 minutes! She used a 7½-pound gun and did not rest a minute despite the fact the barrel of the gun became so warm a number of times that ice water had to be poured over it. She suffered a blistered hand but still was shooting better at the close than when she began. She broke 96 of her first 100 targets and 98 of the last 100. Her lowest score was 95 and her average for the 2,000 was a shade less than 98 percent. She compiled straight runs of 106, 111, 139 and 280.

Mrs. Topperwein was a member of a team of industry reps that toured the South in 1904. When that team broke the world’s record with 490x500 at Albany, Ga., she recorded 96. She constantly would average 94 and 95 percent shooting against the best talent in the world. She had nine century-runs in 1913, the longest being 165. Shooting in a gale wind at Laramie, Wyo. for the Denver Post trophy that year, she broke 94 from 21 yards, and at the 1913 Grand American Handicap at Dayton, 0., where she was the only woman shooting, she broke 94 from 20 yards. The Eastern Handicap at Wilmington, Del. found her outfiring the entire field of 250 of the best shots in the country with 98 from 19 yards.

Although trapshooting was her main interest, she also was an expert with the rifle and pistol, and she won many trophies with them, too. She retired in the 1920s after the birth of her only child, a son. She died in San Antonio, Tex. in January of 1945.