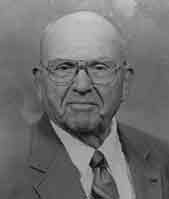 In 1947, Allen Tomnitz won Class C honors in the Singles Class Championship at the Grand American. He did not earn another Grand American trophy for 40 years. However, once he started winning there again, he hasn’t stopped, and he has added 119 more to that first award. Tomnitz still counts that first trophy, which he won with 100 straight, as his most valued.

He won two Trap & Field All-Around Average Awards in veteran ranks—one first-place in 1990 and one second-place in 1989. From 1992 to 1999, he won four senior vet first-place average awards and two for second place. He has been selected to 15 All American Teams, elected captain 12 times.

“Since he turned 65, trapshooting has been his life,” said Rick Kalsow, who has been shooting with Tomnitz for 15 years and will introduce him at the Hall of Fame banquet.

Al’s trophies at Satellite Grands include 33 at the Spring Grand, 49 at the Southern Grand, 72 at the Midwestern/Southwestern Grand, 25 at the Dixie Grand, 64 at the Great Lakes Grand, 60 at the Northeastern Grand, and 75 at the Western Grand. He has won 13 championships at the Central Zone and 18 at South Dakota state shoots.

“If there’s a senior veteran trophy, there’s a pretty good chance Al Tomnitz is gonna win it,” Kalsow said. “He has rooms in his house stacked full of boxes of trophies.”

Tomnitz started shooting trap in 1945, when a neighbor introduced him to the sport. He registered his first targets in 1946. Because of his job as a corporate pilot, he was unable to shoot much in the ’60s and early ’70s. Tomnitz stopped flying six years ago and misses it. “I wish I was still flying every day,” he said.

Among his most memorable moments, he counts winning the All-Around at the Central Zone last year and winning the Singles Championship at the 1999 Central Zone with a run of 475. He especially appreciates these wins because of “the number of great shooters” competing, including 2001 Hall of Fame inductee Robert Munson. “When you win against Bob Munson, you’ve done a good thing,” Tomnitz said.

According to Kalsow, Tomnitz is not only a talented trapshooter but also a skilled gunsmith, car mechanic and electrician. “If there’s anything that needs to be done, Al Tomnitz can do it,” he said. Tomnitz put these skills to work when his Seitz gun needed a release trigger. After examining another shooter’s gun, he installed the trigger himself in his home machine shop. Tomnitz also carries a complete tool kit in his car when he travels to shoots, so he can repair his or other shooters’ guns should they need it.

Tomnitz says his role models include all the “hot dogs” of the sport. According to Kalsow, Tomnitz knows everybody, including Munson, Kay Ohye and Ray Stafford, and they sometimes invite him to shoot with them. “Sometimes you beat them, but not very often,” Tomnitz said.

Tomnitz will be 81 when he’s inducted into the Hall of Fame and still competing and beating men who are 30, 40 or 50 years younger than him.