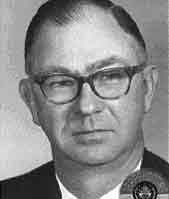 Earl Toliver, who has shot since 1951 and attended all Grand American tournaments from that point to the time of his induction, was the driving force behind trapshooting’s Hall of Fame and Museum. In 1968, during a time of expansion of the Amateur Trapshooting Association and increasing federal legislative activity, he became the 36th president of the ATA -- and the third from Orleans, Ind. Toliver spent many hours and traveled thousands of miles in working to make the Hall of Fame and Museum a reality, in appearing before clubs and service organizations to promote trapshooting, and in attending legislative hearings in Washington.

A trapshooting Hall of Fame and Museum had been proposed and promoted by various individuals for many years, but it was Earl Toliver who provided the impetus for the fulfillment of the dream. In 1964 he was elected ATA delegate from Indiana, and the same year he was selected as Central Zone vice president. Upon succeeding to the presidency in August of 1967, he spearheaded the construction of the new wing to house the Hall of Fame and Museum and the remodeling of the ATA clubhouse, the first major addition and renovation to the original headquarters built in 1924.

Toliver also achieved as a competitor. He established a record for most 100 straights in singles for one year, entering 41 perfect 100s in 1961, and he recorded 31 100 straights the following year. In 1962 he was a member of a squad which broke 500x500 singles at the Indiana State Shoot, the second perfect squad in history.

Toliver earned his initial Grand American trophy in 1961 as one of five Indiana gunners who totaled 988x1,000 to lead the State Team Race. He broke 199 in that race and then smashed 200 straight to tie in the Clay Target Championship. In 1965 he had another 200 at the Grand, ending with fourth-place AA honors in the Class Championships, and he won the top award in Preliminary Friday’s singles. He won Class AA honors in 1968’s prelim contest, also with a perfect century.

In Toliver’s first year as a veteran, 1978, he won category titles in the Doubles and Clay Target races, and in 1979 he was Class C veteran leader in the Class Doubles. At the 1981 Grand he earned four top veteran awards — in prelim Friday’s singles, the Class Singles, the All-Around and the High-Over-All.

Toliver was Senior Veteran Champion in the 1984 Southern Grand Doubles and All-Around, and he also won two awards at the 1982 tournament.

He was Indiana State singles champion in 1957 and 1958 and the 1980 ATA veteran singles champ. He won four other awards at that 1980 shoot, plus numerous others through the years in his home state and at other major championships. Early in 1980 he captured 18 trophies during Florida Chain competition.

Elected to the Indiana State board of directors in 1955, Toliver served as the association’s secretary-treasurer from 1969 and was holding those offices at the time of his induction. He was largely responsible for the group’s purchasing the Indiana Gun Club for the state homegrounds.