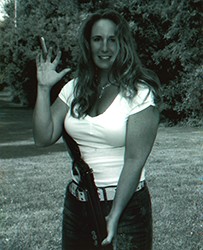 Jacque Snellenberger of Coldwater, Michigan, has been around trapshooting all her life. She attended her first Grand American when she was six days old. Dad George, who was inducted into the Trapshooting Hall of Fame in 1983, is a 24-time All-American and an ATA champion in four states; mom Kitty, who passed away in 2007, was a member of the 1974 All-American team and a champion in three states.

Jacque and George are the second father and daughter to be enshrined into the Hall of Fame, following Kay Ohye and Deborah Ohye-Neilson.

Her parents decided not to let Jacque shoot until she was 15, when they felt she was old enough to make the decision herself and handle the pressure of competition. When she turned 15, she went right to her dad and said, “Let’s go!” She began registering targets in 1985.

She reached the 27-yard line in 1993 at the Battle Creek Gun Club and earned her AA-27-AA pin six years later. She broke 200 for the first time during the 1994 Maryland State Shoot; earlier in the year, she’d gotten her first 100 straight.

Jacque has also won the 1997 Northeastern Grand American handicap, 2002 Michigan handicap and 2003 ATA Central Zone singles, all over the entire field. Numerous Satellite Grand, ATA Zone and Michigan state women’s titles are hers as well. To date, she has secured 27 ladies’ crowns at the Great Lakes, Heartland, Northeastern and Southwestern Grand tournaments. Twice she has won Michigan women’s singles titles with 200 straight.

In 2006 she was inducted into the Michigan trapshooting Hall of Fame. Snellenberger enjoys dancing, including ballroom, country and West Coast Swing. She also plays in a volleyball league.