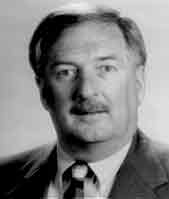 Kansas shooter Roger Smith began registering in 1967 after wife Mary’s brother, Mark Heinz, had introduced him to the sport a year earlier. Roger collected his first Grand awards after 200s in 1974--the Dayton Homecoming championship--and top AA laurels in the Singles Class race. In 1975 he ended as AA runner-up in the class l6s, and in 1976 be was fourth in AA of the class doubles after 98, and third in the High-Over-All with 966x 1,000.

Smith moved to the top of the 1977 High-Over-All with 965, and he placed third in the Champion of Champions competition after 100 and seven overtime rounds. In 1979 he was a member of the victorious Southwestern fivesome in the Division Team Race, and in 1981 he secured runner-up in the Dayton Homecoming after breaking 200.

The only championship target Roger Smith lost during the 1983 Grand American was his 30th in the title Doubles, and the resulting 399x400 stands alone as an All-Around record for the tournament. That same year Roger won the Clay Target crown with 75 in overtime following a 10-way tie at 200, and became the second 27-yarder to prevail in the Grand American Handicap, after a record five smashed 100 apiece in the field of 3,708. He lost his first bird in the GAH shootoff and posted 24 again in his second round for the victory. Just three other 399 All-Around scores had been recorded in all ATA shooting prior to Smith’s lone one at the Grand. In 1983 he also annexed Class AA honors in the High-Over-All with 980x1,000. The next two years he scored 976 and 971 for repeat wins of Class AA High-Over-All becoming the first to capture it two, and then three years straight.

Smith ended runner-up in the first Spring Grand American Singles Championship in 1977 after 200 and four extra rounds, and he snared the Handicap crown for 98 from 27 yards, won the All-Around with 394x400, and finished second in the High-Over-All for his 489x500. Three years later he captured the 16-yard title following 199 plus 50 straight, and in 1981 he earned AA honors in the Doubles Championship after a 99 tie for the crown and placed fifth in the feature handicap with his score of 97. He also was victorious in the Midwestern Grand.

Roger collected three Southwestern Division championships: the All-Around title with 396 in 1980, the singles in 1982 with 200, and the handicap in 1985 with a 99. The 400 he shot in overtime for the 16-yard title set a record for off-the-Grand-American grounds.

Before the founding of the Amateur Trapshooting Association, just one other competitor had ever captured the Clay Target and Grand American Handicap titles the same year. The year was 1914 when the Grand was hosted by the Interstate Association. Woolfolk Henderson posted a 99x100 for the Clay Target Championship, and 98 from 22 yards in a Grand American Handicap field of 515.