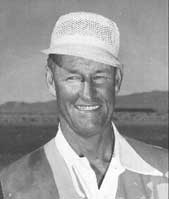 D. Lee Braun of San Mateo, Cal. was named to 14 industry All-America teams in a shooting career that spanned 26 years, from 1943 to 1969. He captured four industry Clay Target Championships at the Grand American, and he shot on a record-setting 16-yard squad there. The author of two instructional books on clay target shooting, Lee starred in the movie versions of both.

During the Clay Target Championship at the 1947 Grand, Braun was a member of a singles squad which entered a 996x1,000 total, bettering the existing nine-year-old mark by three. The 996 remained a record—although tied four times—at any shoot until 1971, and it was high on the Grand grounds until 1975, not being surpassed by any squad containing an industry member until the Grand of 1980. Braun won the industry Clay Target crown with his 200 while in the record-setting squad, and he captured the crown eight years later with 199. A 200 won the title for him in 1960, and the same score earned the championship for him in 1966, the title for which he will probably be best remembered.

Braun went to work for Remington Arms Company after World War II, and he was regional sales manager when he passed away at age 61 in 1972, following a long illness. Remington established a memorial scholarship for him the following year, and, at the time of the announcement at the Grand, Remington vice president and director of marketing Jack McAndrews gave this account of Braun’s personal courage and skill.

"It occurred right here at the Grand in 1966. Lee’s health had not been good, and he had not been shooting competitively at all that year. For the first time in his shooting career, he had come to the Grand as an observer only—with no intention of shooting any events. For a number of days, he confined himself to riding up and down the line in an electric cart. Finally, he couldn’t take it any longer. He signed up for the Clay Target Championship of North America and began to work his way from station to station and from field to field— hiding his pain and fatigue behind the relaxed, flawless shooting style that was the Braun trademark. We all watched him very carefully because we didn’t think he could make it. Well, he did make it, and he did it the Lee Braun way—by smashing 200 straight targets in what was unquestionably his most amazing shooting feat."

Braun first shot trap in 1943 during World War II, while serving as a gunnery instruction officer for the Army Air Corps. At the Grand American his initial year, he fired on the winning Army fivesome in the Team Race. In 1943 Braun was fourth in AA of the Class Singles Championship, and he ended third in A of the Doubles Championship. Braun (who left the Army as a major) continued to attend the Grand American after his service career, missing just two of them after that 1943 beginning.

Acknowledged as one of the finest teachers in the shotgun sports, Lee Braun was the author of two books about clay target shooting and the star of the movie versions. McAndrews remarked at the time the Braun scholarship was announced: "Lee took particular pleasure in teaching youngsters—and watching them grow toward championship stature. He was a firm believer that the personal confidence and self-discipline learned from competitive clay target shooting carried over their values into all phases of life."