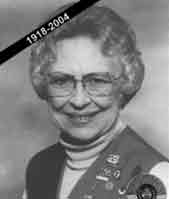 Marjorie Smith is being honored for her outstanding and innovative volunteer contributions to the sport of trapshooting.

In the early 1970s, Marjorie was asked to become a member of the Trapshooting Hall of Fame and Museum historical committee, and in the fall of 1976, she was appointed Museum Director by the Trustees. Marjorie currently serves in that capacity and also as corporate secretary, all on a volunteer basis. Marjorie is responsible for major changes and modernization at the Museum. She began the taping of interviews with enshrinees. Since 1985, all the induction ceremonies have been videotaped live. Among the many plans to be incorporated into new or expanded facilities is a small theater so that what has been captured on videotape can be viewed by visitors in years to come. (A Capital Improvement Fund has been established for such facilities.)

She was responsible for developing the sustaining contributor program that provided a predictable annual income, making it possible for operational goals to be established.

Marjorie also instituted the system of recognizing contributors of artifacts or money to the museum. She established a register of these contributors, housed in an "appreciation console" which became the focal point in the ground floor section of the Museum after its renovation in 1979.

Marjorie was liaison with the designer of that $70,000 renovation which involved expansion onto two floors.

The expanded facilities provided room for an extensive library, which includes early copies of magazine, Average Books, programs and rule books. Marjorie instituted the establishment of these historical records and has made the valuable resources available to the public. During the Grand and throughout the year, many people use this background material to do research for their state Halls of Fame or even genealogical research of someone they know was a trapshooter.

The Museum’s exhibits and collections have significantly increased during Marjorie’s years of service. One exhibit that has been added focuses on John Philip Sousa. Marjorie did extensive research on Sousa, including a trip to Washington to examine records of his tenure with the Marine Band. Marjorie has made numerous personal donations to the Museum, among which is an exhibit of a gray felt skirt boasting colorful emblems which tell of her trapshooting accomplishments. (She appeared on the cover of the February’ 1966 issue of Trap & Field wearing that skirt.)

Due to Marjorie’s efforts, in 1990 the Trapshooting Hall of Fame was admitted to membership in the Intentional Association of Sports Museums and Halls of Fame (IASMHF). Executive Director Al Cartwright visited the Silver Dollar grounds during the Southern Grand and presented an IASMHF plaque to Marjorie.

Established in 1971, the IASMHF serves as a forum for the sports museum/hall of fame industry, fostering the exchange of ideas and information on exhibits, collections, financing, preservation, induction, promotion, etc., among its members.

The organization authorized publication of the book Sports Hall's of Fame. The Trapshooting Hall of Fame entry features photos of the front of the building, enshrinee hall, Annie Oakley and John Philip Sousa. The paperback is sold in the museum.

Marjorie served a two-year term on the board of directors of IASMHF and the association’s By-Laws Revision Committee. Membership in the organization has brought intentional recognition to the Hall of Fame and Museum.

The Trapshooting Hall of Fame and Museum has its own page on the IASMHF website (www.sportsheritage.org). From that page, visitors can link to the Trap & Field web page. where they can take a virtual tour of the upstairs portion of the Museum. On its links page, T&F also provides a link to the IASMHF site.

Marjorie’s interest in trapshooting began in 1950 when she attended her first Grand American as a spectator. She and husband Robert, past ATA President and 1985 Hall of Fame enshrinee, were passing through Ohio on their way to a wedding in Illinois, and they stopped in Vandalia so Bob could shoot.

The following year Marjorie decided she would rather be a participant and asked Bob to teach her how to shoot. After patient instruction from him, she won the 1952 Maryland women’s title with 93x100. Marjorie successfully defended her crown the next year with 91 and she earned additional ladies trophies in ‘56 (98), ‘57 (88) and ‘59 (94).

At the 1957 Grand American, Marjorie won the women’s award in prelim Friday’s handicap with 95 from 19. She captured the 1956 Eastern Zone ladies’ championship with 185x200.

Marjorie collected several awards at Westy Hogans tournaments In 1954 she tied for top honors in the preliminary handicap with 47x50, and she won the women’s trophy in a shortened 16-yard event with 41x50 and extras. The next year, she earned Class E and women’s laurels in the singles with 95, and she finished second among ladies in the final handicap with 91.

Marjorie shot her last Grand in 1975 and has attended 46 tournaments overall.

From 1952 through ‘60, Marjorie finished first or second among Maryland women in singles, handicap or doubles averages, and she was named to the ‘60 and ‘61 women’s All-American.

Marjorie’s interest in historical preservation began in 1945, when she founded and became editor/publisher of Spinning Wheel magazine, an international antiques and collectable publication. She remained in the position until 1963, when the magazine was sold. In 1954 Marjorie co-authored Handbook of Tomorrow’s Antiques.

Marjorie has been a private pilot and licensed ground school instructor in navigation.

Marjorie’s many accomplishments through the years have earned recognition in Who’s Who in America and Who’s Who of American Women.