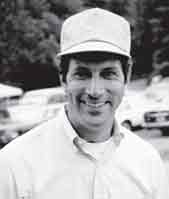 Gerald Russo began attending ATA shoots in 1972, using the sport as practice for bird hunting. The result was 10 times on All-America teams 1977 through 1997, including six first -string placements.

His first of 37 trophies at the Grand American came in 1974. He earned AA third in the Class Doubles with 100, and he joined brother Larry in the Brother-Brother championship with a record-tying 398. Two years later they established a new record of 400 for the title and repeated with a perfect score in 1980. Between 1974 and 1996 Gerry and Larry also set a record of 11 brother championships.

In 1976 Gerry won the AA title in the Class Singles, and the All-Around crown was his in 1979. He topped AA ranks in prelim Friday’s twins in 1981 and captured high gun honors in the next day’s doubles. A member of the winning state and zone teams in 1982, he helped both teams set record scores of 998 and 997. New Jersey, with Gerry, won again in 1986.

Gerry broke his first 100 straight from the 27-yard line in the 1988 prelim handicap on Thursday. He ended runnerup after three rounds of extras. In 1990 Russo won prelim Saturday’s doubles with 100, claimed the AA singles award that same day, then placed ninth in the Vandalia Handicap. The next year he was fourth in the Vandalia. Gerry was runnerup in the Ohio Handicap in 1992, placed third in AA in the Class Doubles with 100, and was AA high in the Doubles Championship with another straight. That next year he was 18th in the Grand American Handicap and was third in the High-Over-All. He won Saturday’s prelim singles in 1994 (with 100 and 425 carryover), and one year later was runnerup in both the Dayton Homecoming race and the All- Around. He also placed 15th in the GAH. In pre-lims that year, he was AA champ in Thursday’s doubles (100 and 60 in shootoff), and won Saturday’s 16s. In 2002 Gerry was AAA runnerup in the Dayton Homecoming.

There are 19 New Jersey titles to his credit–four singles (the latest one with 200 in 2008), three handicap, six doubles and six all-arounds. He also won at numerous state shoots in New York, Maryland, Delaware, Pennsylvania and Florida, plus awards at the NYAC championships and Westy Hogans. In Golden West Grand competition he captured five trophies in two years. At Satellite Grands Gerry collected 11 trophies in 1992, 1997, and 2002 Northeastern competition, including high-over-all and all-around titles. Among the seven trophies in 1992 was one for 100 from the 27. Awards at the Great Lakes were AA trophies in 1990 and the doubles championship with 100 in 1995, plus a doubles win in 1989 and a 1995 singles award at Southern Grands.

Russo was inducted into the New Jersey Hall of Fame in 2005.