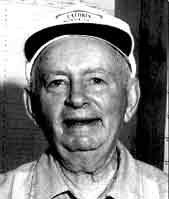 After serving his adopted country in the Canadian Expeditionary Forces in World War I, playing hockey and semi-pro baseball and exploring a career as a market hunter, Jimmy Robinson joined the Amateur Trapshooting Association as a statistician in 1922. For the next 50 years, no one was to know more about trapshooting or serve it so well as a goodwill ambassador and press agent par excellence.

On Apr. 11, 1925 Jimmy became life member #910 in the ATA. A year later he began writing for Sports Afield magazine, with his first article about a good friend of his, Annie Oakley. He soon began a trap and skeet column and was still its editor at the time of his induction into the ATA’s Hall of Fame in 1971. World-renowned as a hunter, fisherman and conservationist, his writing career spanned 45 years. Several times he tried to retire, but couldn’t — his editors wouldn’t accept his resignation and no one could replace him.

The year Jimmy joined Sports Afield, he began getting together one of the most important collections the ATA has in its clubhouse today, a photograph of every Grand American Handicap winner. The next year — 1927 — he began recognizing achievements in trapshooting by selecting an All-America team, a suggestion made by his good friend Grantland Rice. Until 1964 he did it alone, and in the years since, he’s been chairman of a six-man committee. In addition to the thousands of hours he devotes to poring over shooters’ records, he’ll spend another week of 12-hour days preparing individual releases for more than 100 newspapers on the team — all volunteer work.

He worked unceasingly through the years to establish the ATA’s Hall of Fame, becoming a member of its first committee when it finally became a  reality in 1968. He also was instrumental in establishing many state trapshooting Halls of Fame.

Each year since 1935 his series of releases on his duck survey of Western Canada has been eagerly awaited by 400 newspapers, and his contributions in building Ducks Unlimited have been so great they named him an honorary trustee in I 970, along with Bing Crosby and Andrew Mellon.

He has published three books on trapshooting (including one in 1965 listing All-America teams and records in the sport and two on trapshooting and Grand American history) and several others on hunting.

Jimmy Robinson was born Aug. 27, 1896 in Minnesota, moving to Manitoba as a youth. At the age of 75, he was reporting his 50th Grand American Tournament as the dean of the world’s trapshooting writers. His fantastic memory, his indefatigable work and irrepressible personality have promoted trapshooting for 50 years and endeared him to the world and to trapshooters.