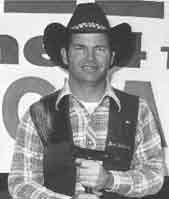 Britt Robinson of Tahoka, Tex. began shooting at age 10. Twenty-six years later, he became the youngest to be inducted into the Trapshooting Hall of Fame. By then he had captured three Doubles, one All-Around and three High-Over-All championships at the Grand American and placed on eight All-America open first teams, earning captain’s or co-captain’s honors five times.

He set two records while earning 10 Trap and Field All-Around Average Awards, and when he led handicap and doubles averages in 1970, he was the first to top both those lists since 1933. He was the initial person to win the Doubles Championship at the Grand twice with 100 straight and the first to break two, three, four, five and six perfect scores in Grand twin competition. He set a long-run handicap record from the 27, tied the high mark for doubles marathons twice, and shot on two record-setting singles squads. He captured 12 Texas ATA titles in 25 years, including seven after leaving junior ranks.

In 1959, his first year of ATA competition, Britt was Sub-Junior Clay Target Champion at the Grand American, and he repeated for the crown the next two years, setting a consecutive record. In 1961 he was also high Class A junior in the Class Championships plus junior runnerup in the Champion of Champions. The next year he earned the 26-yard trophy for life members in the Grand American Handicap. Robinson was Tuesday’s Special Doubles winner at the 1967 Grand after a 99 and prelim Saturday’s doubles leader in 1968 with 100. In 1969 he won Class AA H-O-A honors, the high-gun award in prelim Sunday’s handicap, and the prelim International title with 100 plus overtime. He was AA champion in the 1970 Class Doubles.

In 1971 Britt was High-Over-All Champion, All-Around runnerup, and AA runnerup in the Doubles Championship. He repeated as H-O-A Champion the following year, after annexing the All-Around and the Doubles championships. His was the third 100 to win the Doubles crown and marked the initial time for any shooter to have two 100s in Grand twin competition. That year he was also AA runnerup in the Class twins and prelim Friday’s handicap leader. In 1973 Robinson became the first to have three 100s in doubles at the Grand, winning on prelim Saturday. He was also Friday’s singles leader and Class AA 16-yard high on Saturday.

Britt won his third High-Over-All crown in 1974, when he was also AA runnerup in the Clay Target after 200 straight as well as Trap and Field Handicap Champion and winner of the prelim International race.

The 1974 Doubles Championship was his for 100 straight, the first time in history anyone had won twice with a perfect score. He regained the crown in 1980 with 99. In 1983 he ended third in AA of the Class Doubles following a perfect century, and that set a record for six 100s in Grand competition. His fifth had come in 1980’s preliminary Saturday race.

Robinson won awards in every championship contest at the 1982 Midwestern Grand, tieing for the All-Around title with a record 395x400, and he also snared a prize in 1984’s Southern Grand Doubles Championship.