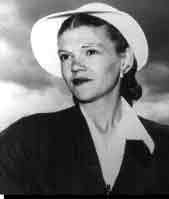 Ruth’s most prolific years at the trapline encompassed the late 1940’s through the early 1960’s. At the 1960 Montana State Shoot, she was the only person to shatter 200 in the Singles Championship, winning the top non-resident trophy. This 200-straight was the first in the A.T.A. record books posted by a woman.

At the 1960 Grand, Ruth paced women in the Introductory Singles with 199, and she won the ladies’ trophy in the Preliminary Saturday handicap that year with 90 from 22 yards and a pair of 24’s in overtime.

She and Cal captured the Husband-Wife title at the 1948 Grand American with 198x200, and the following year they earned the championship with 195. Ruth contributed 98 and 97 to the winning totals. Also in 1949 Ruth finished second in shootoff with 24 in the women’s Champion of Champions contest after a 97 deadlock for the crown.

The Ray’s were the first husband-wife duo to place on All-America teams the same year. They were both selected in 1949 and 1951.

In 1948 Ruth won a handicap in Sun Valley with 99, two targets over the field. The following year she broke 99 again, this time to tie for runner-up honors. She earned that prize in shootoff over two, including the legendary Arnold Riegger.

One year she registered a total of 16,550 targets of all three types. She retired with more than 41,000 registered 16-yard targets and now enjoys golf and volunteer work in her Washington State home.