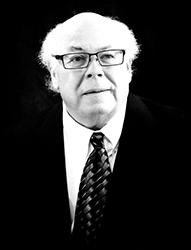 State: NE
In October 1969, Jim Bradford Jr. of Norfolk, Nebraska, got an inauspicious start in the sport at a club when he didn’t know anything about protocol, rules or even the proper equipment. He was quickly given pointers and correct shells, and he shot a number of rounds, winning a small turkey and ham.

He had just gotten out of the Army and was attending Creighton University. The following year he joined the ATA and shot his first 100-target event at the Norfolk Gun Club. A few years later, he began shooting more. Jim’s first 100 came at Norfolk in 1974 and his first 200 at Crooks Gun Club (Sioux Falls, South Dakota) in 1979.

At the Grand American, he broke 200 in the 1985 Singles Class Championship, the 1989 Dayton Homecoming, and the 1990 and 1992 Clay Target Championships. He reached the 27-yard line at the Tekamah (Nebraska) Gun Club.

Among his wins in ATA Central Zone competition was the 1985 handicap title, with 99. He has four Nebraska state awards in his collection. At the 1990 Golden West Grand, just two months after a heart attack, he broke 100 in singles and then led the day’s handicap with a lone 99.

In spring 1983, Bradford met Randy Clark and congratulated him on becoming ATA President at such a young age. Randy told Jim he could do the same, saying that with his enthusiasm and drive, he should run for ATA Delegate. Jim ran for the office that year and won. He held the post until 1995.

He was elected Vice President unanimously by the Central Zone ATA Delegates and ended up assuming ATA Presidential duties the year before his term, when 1992 President Gene Anastasio became critically ill. During Jim’s tenure on the Executive Committee, his projects included establishing a 9 p.m. shootoff time at the Grand American in Vandalia, Ohio, improving the order of the shooting day. Electronic pre-squadding was initiated. In 1993 he signed the original contract with R. J. Stuart for cashiering services at the Grand.

From 1985 to 1988, Bradford was on the Central Handicap Committee, and he spearheaded the ATA Relocation Committee from 2001 until the ATA voted to relocate to Sparta, Illinois.

Since his Presidency he has been a Trustee for the Trapshooting Hall of Fame. He became Chair for the 1997-’98 term and is still filling that position. An advocate of relocating the Hall of Fame to Sparta, he has led fundraising efforts to build a modern facility and thus ensure the best housing and presentation of the sport’s valuable artifacts.

Jim has also volunteered in numerous capacities in his community. He was president of Sacred Heart St. Mary’s Parish, Norfolk YMCA, and Norfolk Area Chamber of Commerce, and he chaired the local Ducks Unlimited chapter for more than 20 years. He has excelled in fundraising for numerous causes, including coordination of a sizeable donation from fellow Nebraskan Johnny Carson for a senior center.

Bradford continues to run a thriving insurance business and promote trapshooting to those of all ages.