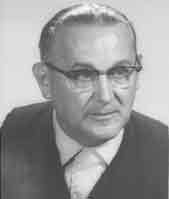 It has been said that Herb Orre was once responsible for breaking more targets than anyone in trapshooting --- not through his own shooting prowess, but because he spent his life perfecting guns for the sports champions.

Son of a world renowned shot manufacturer near Stockholm, Sweden, Herb always loved to hunt. His introduction to a Model 12 shotgun, 4,000 miles from its place of manufacture, when he was twelve years old so excited him that after examining it from barrel to forearm, from trigger mechanism to stock, and then firing it, the decision for his future was made. It was then he determined that one day he would leave his native Sweden to come to the United States.

A few years later he followed through on his childhood dream. When he reached these shores he applied for a job at Winchester Arms Company. Tests showed that he had a tremendous knowledge of firearms and mathematics and he was hired. He started as an instructor in shotgun manufacturing and then was promoted to chief inspector. During this time he changed the hammer design and the firing pin on the Model 12. When he was foreman in the assembly room he developed the technique for assembling a new side-by-side shotgun. The development of the new gun had begun in 1928, two years after he began working for the company. Shortly before this time, the company had abandoned its policy of designating guns by model numbers reflecting the year they were developed. Arbitrary numbers had begun to be used.

For Herb Orre, the boy from Sweden, there was special significance to the number assigned to this new gun, the Model 21. He was 21 years old when he worked with George Lewis and Frank Burton (the men whose names appear on the patent) on designing and producing the gun. One of them asked Herb’s age at the time the gun was to be named, and the answer became a part of firearms history.

Four years later Herb Orre attended the Grand American for the first time. It was here he claimed he started to learn about the people, and at the same time began to learn what shooters wanted and needed in a trap gun. Seventeen years later he left Winchester Arms and set up his own shop where he declared he "wanted to give the shooters something to think about". He gave them the Herb Orre Super-Choke.

The effects of that decision were far reaching. He eventually established his shop in 1955 on a 24- acre farm on the outskirts of Phillipsburg, Ohio. Ideally located a few miles from Vandalia, Herb was in a strategic location to serve the multitude of both local and transient trapshooters. Those who couldn’t come in person used the U.S. mails, sending so many guns from all parts of the country to Phillipsburg that the post office moved up a notch on the scale of postal ratings that were determined by mail volume. The town even acquired a new post office building. Herb’s Super-Choke invention that opened the shotgun pattern quickly to give a better advantage for 16-yard shooting (and handicap up to 24 yards), opened many other doors as well.

For five decades Orre watched shooters come and go - - - and some of them stay on as champions. He had a fantastic memory for details and could remember winners of every important shoot he attended, heard about, or read about. This, plus his objectivity, led to his 10-year appointment to the All-American Selection Committee in 1963. From 1932 to 1965 he never missed a Grand American.

A testimonial to Herb Orre once described him as "one of the masterminds that vastly improved gun technology, and therefore scores". Among the many outstanding champions who availed themselves of Herb’s expertise in gun choking resulting in such top ranking scores were Trapshooting Hall of Famers Bueford Bailey, Hiram Bradley, Gene Sears, George Snellenberger, and John Sternberger.

Herb’s white house and barn near Phillipsburg were a far cry, in many ways, from the castle he left in Sweden. But, there are thousands of persons associated with trapshooting who are glad this man chose to take the long trip. His decision to come to the United States not only changed his life; it helped alter the history of trapshooting.