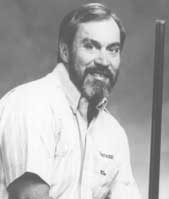 Bonillas won his first Grand American trophies in 1972—AA runner-up honors in the class singles for 200 plus extras, and the Champion of Champions crown for 100 plus 200 carryover and a forfeit. In 1975 he posted the first 100 from 27 entered on the Grand grounds, winning Preliminary Friday’s handicap. He had another 100 from 27 in ‘81 to pace what is now the Budweiser Handicap on Thursday of Grand week.

At the 1980 Grand American Dan hit 994 straight singles from Preliminary Thursday through the 94th bird in Wednesday’s Clay Target Championship. Along the way, he secured the top award on Preliminary Thursday for a lone 200 plus first-place prizes on Friday (100) and Saturday (100) and runner-up laurels in Sunday’s Dayton Homecoming (200), all after carryover. He has earned 16 additional awards during prelim days, including five for perfect twin-bird centuries.

In the 1978 Spring Grand American Doubles Championship, Bonillas posted a lone 99 for the title. He needed tie-breakers before winning again in 1979 after 100 and 1982 following 99. His 389 was good for all-around crown.

He has amassed more Golden West Grand American championships than any other, among them the coveted all-around 7 times, and high-over-all 10 times in an 11-year stretch (1972-1982).

Dan has won innumerable championships in the A.T.A. Western Division (Zone) in all categories. He won the 1977 Singles Championship after a long shootoff, and won the title outright in 1980, and ‘84, all three times with 199. He’s also earned three doubles, one handicap and six all-around crowns, with his 397 in 1977 setting a record not matched or surpassed until 1988.

Dan has taken home four California singles titles for 200 and also won the doubles six times — — his 100 for the 1974 twin-bird crown being the first in the Golden State record books. His ‘86 and ‘92 victories were also with perfect scores. He has captured 11 all-around championships, a number unmatched in the State. His 395 tied the record in 1975, and he set a new mark of 397 four years later. That total was not equaled until 1985, when Dan broke 398 — which has been entered once since, but not topped.

At the end of the 1993 shooting season, he had entered 94 perfect centuries in doubles, more than any other shooter in history. He also had eighty 200 x 200 singles scores (including 20 at the Grand American) plus twenty-six 100s from the 27-yard line (second in lifetime standings).

A former junior college quarterback whose team reached a number one ranking, Dan was inducted into the California Trapshooting Hall of Fame in 1990.